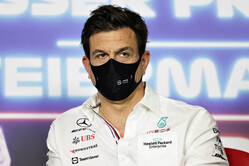 Toto Wolff: Everyone has their own opinion on the events of Silverstone, and it was a very polarising incident. However, the most important thing is that Max is OK. It's never nice to see a car crashing, particularly at such high speeds and at a corner like that, so we're glad he emerged from the accident unscathed.

The last race weekend was a very entertaining one for the fans and we had a full-capacity crowd in the stands, which hasn't happened for quite some time. We could feel their energy. That made the weekend incredibly special, and obviously they had the chance to watch a very dramatic race, as did everyone else at home.

For us, it was an encouraging weekend with the pace of the car, the small upgrades we introduced worked well and we scored some big points, so we're looking to keep that momentum going.

Lewis was on incredible form at Silverstone with a brilliant recovery drive in front of his home crowd after the penalty. It was also a strong weekend for Valtteri too with some great teamwork and good pace, which has closed the margin in both Championships.

We know how fine the margins are this season and how the advantage is swaying from one team to the other at each race. Us and Red Bull looked very closely matched at Silverstone and Ferrari were very quick, and now the battle moves onto the next round and a very different track.

The Hungaroring is a high-downforce, tight and twisty circuit. Almost like a large version of a go-kart track. Hungary will therefore be a different beast compared to the last race, and it is a track that will likely suit our competitors more, but we'll give it all we've got.

It's been a long and intense first half of the season and we're almost at the summer break. We want to ensure we head into the shutdown on the right foot, before we get the chance to recharge, take stock of everything that's happened so far and then come back fighting in the second half of the season.