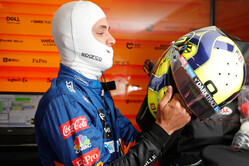 Lando Norris: "I'm looking forward to heading back to Hungary, a track that has good memories for me after my official F1 test debut there in 2017. We've had a good start to the season so far, and we'll be aiming to finish the first half of the year on a high, before a break over the summer shutdown. The Hungaroring can be a tricky circuit to get right, and we know that it'll be a challenge to outperform our closest rivals in the Constructors' Championship. But we'll be giving it everything to continue building that gap and set ourselves up for a strong second half of the season."

Daniel Ricciardo: "I can't wait to go to Budapest, it's one of my favourite tracks on the calendar and a race that I've won in the past as well. It's a very tight and technical circuit with high levels of downforce required on the car, but that just adds to the challenge and excitement for me, it's a real driver's track. It's a circuit where overtaking can be difficult, so we'll be working hard to maximise our performance on Saturday, which should line us up for a slightly easier Sunday. As always, we'll keep working hard to score as many points as we can and keep pushing in the Constructors' Championship."

Andreas Seidl, Team Principal: "The Hungaroring presents the team with an interesting challenge compared to the relatively high-speed tracks of Austria and Silverstone. With high downforce levels and a tight, twisting layout, it's no surprise many often describe the circuit as Monaco without the walls.

"The team, along with Lando and Daniel, has done a fantastic job so far to put us in this position in the Constructors' Championship, but we know the fight is far from over, and momentum could shift away from us with a single difficult weekend. The challenges posed by the Hungaroring may not suit our car as much as other circuits on the calendar, but much of the fight for third this year will be decided by how well we perform at tracks that don't naturally play to our strengths.

"We'll be working hard as a team, alongside Mercedes HPP, to ensure we maximise any opportunities that present themselves over the weekend. As always, the aim is to score a good haul of points and keep pushing for the highest possible position in the Constructors' Championship. The team will be giving it all this weekend before we have a chance to regroup and recharge over the summer break."