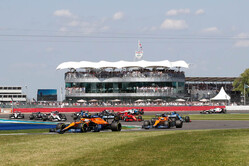 Lando Norris: "A bit of a frustrating race, but also a lot of positives and in the end I'm happy with the result. I would've loved to have a chance to fight for P3 – the pit-stop meant we weren't able to, but I don't really think it would've changed the end result. A good job by the whole team and thanks to them for giving me a great car this weekend. Fourth and fifth for us is a great result and now for one more race before the summer break. We'll keep it up and try to do better next time.

"It was lovely to see all the fans in the grandstands – it made it a lot more special, and seeing them all waving and cheering on the in-lap was cool as well. Thanks to all of them for coming out to support and making it a more enjoyable and special weekend – hopefully we'll see them again soon."

Daniel Ricciardo: "From a team point of view, it was a good day, with both cars in the top five. It's the first time this year that I've had a top five, so I'll take some positives from that – definitely a good day.

"I did struggle with outright pace. There were parts of the race where I felt I couldn't do that much more, so I've still got areas to work on with myself, and getting the car more to my liking, but nonetheless it was good to hold off Carlos. He was a lot quicker! He caught me extremely quickly and I knew that if I was mistake-free, I'd have half-a-chance. From that point of view, I'm super happy to end up fifth.

"Finally, it was great to see so many fans back in the stands here today. As a driver, it really means a lot to hear them cheering you on. There's been plenty of McLaren caps in the grandstands too, so that's awesome to see. I'm definitely feeling the love."

Andreas Seidl, Team Principal: "Today, in front of a phenomenal crowd at Silverstone, containing a lot of our fans and many of our staff from the MTC, we come away having scored a lot of points in our battle in the Constructors' Championship. The entire team, our colleagues from Mercedes HPP and both drivers did an outstanding job this weekend to prepare and adapt to the demands of the new sprint format. We improved session by session and leave the circuit having had a very good day.

"We have to say sorry to Lando for the issue with a wheel nut at his pit-stop that took away his chance of fighting for a podium. He drove extremely well for P4, as did Daniel, who took a good step forward for P5, and withstood relentless pressure from Carlos for more than half the race.

"We hope Max is okay after his high-speed crash and send him our best wishes. It's the one thing that mars a special weekend. F1 and the teams did a great job to put on this new format, which provided a great show for everyone, both in the packed grandstands and back at home. We had a lot of our own people with us in the grandstands this weekend and we really felt the support of the many McLaren fans.

"There's a lot to learn from this weekend – we'll go away and analyse it thoroughly to see how we can improve the next time we try sprint quali. But first, a weekend off, some much-needed rest for the team and then on to Hungary."