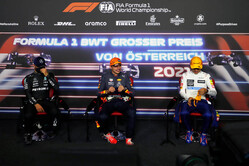 Max Verstappen, winner of the day, what a fantastic weekend it was for you. Another perfect race today. How do you feel about it?
Max Verstappen: Yeah, incredible to be honest. The car was on rails. On every tyre set we put on it was really enjoyable to drive. Pretty insane. I'm a bit amazed myself how today went. I didn't expect it to be like this. Incredible job by everyone to deliver something like this. Of course when you go into the weekend everyone sees you as the favourite but it's never easy actually to always deliver what we did today. A great effort by the whole team and also by Honda. I think the whole package... These two weeks especially here have been incredible.

Yep, it seemed like you had everything under control. You did the restart quite late actually. Were you worried that Lando Norris' top speed was pretty good?
MV: Yeah, I just had to be awake at the start, that I had a little bit of a gap. I knew that if I could go past lap one, or the restart, I could do my own race, but you always have to do that first. But today it has been incredible.

Max, the orange army is back. How did you feel that in the car? Did you feel it once driving?
MV: It was insane today to see all the fans here first of all and of course so much orange, it was just incredible. A great motivation as well, especially on the last lap, the in-lap, there was a lot of orange all over the track, so yeah, thank you very much for coming.

Valtteri it seemed like a better Sunday afternoon after Saturday was pretty tricky looking for Mercedes. How happy are you with P2 today?
Valtteri Bottas: Yeah, for me personally, of course one place better than last week, and I started from fifth. I think as a team we got some decent points considering the gap we have to Red Bull in terms of pure pace. For me, it's nice to be on the podium in second place. I think it was really the maximum we could get today.

Yeah, you seemed pretty racy on the hard tyre at the end. Was the balance just better or did you just feel better on it?
VB: Actually, they held on pretty well. They were starting to drop towards the end, but also with Lando... I have to say, surprisingly, McLaren was really quick today and actually putting some pressure. There's two weeks to Silverstone and we have some work to do but now I'm just keen to have some champagne.

Lando, what an afternoon, you can hear it from the crowd. It was a difficult race I guess. Let's start off at the beginning, you got that five-seconds penalty. I thought it was pretty harsh, what did you think?
Lando Norris: First of all, I want to say a big thanks to everyone, all the fans. It was a lot of fun, it was a good race, it was exciting. But I'm disappointed because we should have been second place. I thought that lap one was just racing really. He tried to go around the outside, which was a bit stupid, and he ran off the track himself. I didn't even push him. I don't know. I'm frustrated but I'm also happy with P3. We had very good pace and yeah, I'm happy.

Towards the end of the race did you think you had a chance to get Bottas or were the tyres at the end?
LN: No, I think we had good pace and I could keep up with him a lot, even in the dirty air, but no enough to get into the DRS. As soon as I got close to one second I started struggling too much. So, ‘shoulda, woulda, coulda' in the end. It's nice to know that we can be there and that we can race them. It's probably the first race in many years that we were racing the Mercedes and the Red Bulls but yeah, hopefully we can keep it up next time.

Max, what a brilliant weekend. Just how satisfying has this been?
MV: Yeah, it was of course a very good race. I think on both tyre sets we had good pace and we could manage the pace through the whole stint, so very pleased with that. Also, the car, again we improved it compared to last weekend. We learned a few things to make it last a bit better in the race and I think that showed today. So, very happy overall. And I think also what was very enjoyable to see was all the fans back. To see that crowd, we definitely miss that atmosphere around the track, with so many people.

Was this the best that the car has been this year?
MV: Yeah, I think so. I thought that was last week, but definitely this week was better.

Max, this was win number five, you are 32 points ahead of Lewis Hamilton in the World Championship, can you tell us tell us a little bit about what it's like to ride this wave of success? How much are you enjoying it?
MV: Yeah, I'm enjoying it, but I'm also focused on the rest of the season. It is still so long and there are still a lot of points you need to score. We need to make sure that every single weekend we are back up there and we basically use the whole potential of the car. We had a good car here in Austria especially, I think it was just very dominant, but we have to make sure that in Silverstone we are there again and that's what we will look into now again to make sure we are very competitive there.

Were there any dramas in the race at all?
MV: Not really. You have to take care. I had a few times a few cars in front of me fighting each other and you don't want to get involved in all that.

Talk us through the safety car restart, because that looked pretty tense from where we were sitting?
MV: Yeah, I mean, I knew that Lando also had good speed, so I had to make sure that I had a good restart. I think it was alright. Of course I also had to defend a bit for Checo so that made my Turn 1 a bit easier. Then of course the draft is a bit gone. But you have to be focused of course to make sure you do a good restart.

Valtteri, coming to you, your fifth podium of the season. How smoothly did things go for you in the race?
VB: I can't say it was really smooth. It was not an easy race for us and starting fifth and ending up second, I think we really had to fight to get to the place we were. I didn't think there was much left on the table for us for today. Max had a really straightforward race. He was quick, their car was quick, so I think second was ultimately what we could get from today and yeah, it was not so easy to do the one-stop. Definitely suffering a bit with the tyres but we knew that would be the case anyway.

Were you surprised by the pace of the cars around you? Let's start with Red Bull. Were you surprised by their pace this weekend?
VB: Red Bull's pace, no surprise. We saw last week that they were fast and of course we expected them to be fast again, no doubt. I think McLaren made a good step. They were definitely putting some pressure to us in the end and it was quite surprising considering there was quite a few tenths of pace difference last week. So, I don't know, maybe Lando can tell me later what they found from the week before and then we can improve.

MV: I think he found out that you have to press the throttle pedal 100%...

Valtteri, can you describe the challenge that Mercedes has ahead of it if it's to win the World Championship this year?
VB: It's a challenge but, you know, but we've been racing on the same track for two weeks and it is clear Red Bull is faster here - but it could be different on some other tracks. I think this track suits their car pretty well, but they're not slow anywhere else. Silverstone is completely different. There are a lot more high-speed corners and so, we'll see. We have something planned in terms of new bits for Silverstone. I think after that it will be quiet in terms of new parts but we'll keep pushing as hard as we can - but we know it's going to be tough.

So does a lot rest on Silverstone?
VB: I think it would be promising if we can make a step forwards and close the gap but honestly if we look at these two weeks as a whole, I think we've made some good damage-limitation against Red Bull considering they've been clearly faster.

Lando, another great race by you. Of your four podiums in Formula 1, how special is this one?
LN: I think until there's still until there's like a top five, they're all just as special, because they've all meant something different, we've always achieved them in a different way. Obviously number one is number one and that's probably the most special one I'm going to have. But then you have Monaco, you have Imola, which was more of a fight back, and this one was the first one where we were more just there because of our pace, and we were there on merit and we were fighting third and second for the whole race - even until lap 71. It was a lot of fun. I don't know where this stacks up. They're all at a similar level. I'm just a bit disappointed. It could have been second and not just third - so maybe this is the worst one.