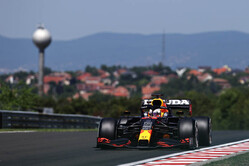 As Copse-gate continues, it remains to be seen how Mercedes and Red Bull, and their respective drivers, react from here on in.

Having last night claimed that Red Bull deliberately set out to "tarnish" Hamilton's reputation, the German team has now claimed that GPS data has revealed that Verstappen went into Copse 1 kph quicker than at any time in qualifying - despite carrying a full fuel load and being on hard tyres.

Meanwhile, in the aftermath of the incident, the Dutch driver will try the engine he was using at the time in this session, as Honda seeks to ensure that no damage was incurred.

Meanwhile, the stewards will be watching Turns 4, 11 and 12 for any signs of track limits infringements.

The lights go green and Ocon leads the way, followed by Mazepin and Giovinazzi.

Given a new chassis for Silverstone, Ocon says the new car has made a world of difference.

Soon there are 16 drivers on track, Hamilton among them, and while most are on hards a couple are on mediums.

Four minutes in and Verstappen is the last driver to appear.

Bottas complains that his brake pedal is too soft, he is assured that "it will get better".

Giovinazzi is the first to have his time deleted, the Italian going wide in Turn 4.

Of the first wave Gasly goes quickest (20.670), ahead of Leclerc and Bottas.

Verstappen wastes no time in asserting himself, the Dutchman crossing the line at 19.725.

Problems with his headrest leave Gasly unable to turn his head.

Currently, the quickest medium runner is Sainz, in sixth, currently 1.054s off the pace.

Verstappen consolidates his position with a 19.694 while Bottas leapfrogs his Mercedes teammate with a 19.694.

A rare spin for Alonso, who loses the rear of the Alpine exiting Turn 4, possibly due to the wind. Other than enormous flat-spots, the Spaniard sheds a couple of bits of bodywork as he slides along the kerb.

Shortly after, Tsunoda spins at Turn 9. "All good," reports the Japanese, the rear of his car covered in flo-vis.

As Russell calls on his team to check torque overrun - no, us neither - Bottas is the first to switch to softs. This comes moments after being demoted to third by Ocon who posts a 19.420.

Unsurprisingly, Bottas is quickest in all three sectors, stopping the clock at 17.616.

At which point Hamilton, who has been told that Bottas was suffering overheating of his rear tyres, and Alonso emerge on softs.

Meanwhile, Verstappen and Perez persists with their hards.

Giovinazzi has only completed 5 laps thus far, compared to Kubica's 16, while Aston Martin continues with its usual Friday programme giving absolutely nothing away.

The session is red-flagged at 12:11 spins off and backwards into the barriers at Turn 4. Asked if he is okay, the Japanese, who appeared to clip the kerb, responds: "F***, sorry, sorry."

The session resumes at 12:16 and understandably there is a mad scramble to get back to work, among them Verstappen, who is now on softs.

Like Hamilton, the Dutchman can only manage a PB in the opening sector, however he ups the pace in S2. At the line it's 17.555 as he goes quickest by 0.061s.

Meanwhile, replay shows that as they headed out after the red flag, Verstappen and Hamilton almost had a coming together in the pitlane as the Red Bull was released into the path of the Mercedes.

Bottas complains of "lots of understeer".

With just over 5 minutes remaining, Perez heads out on softs. PBs in all three sectors see the Mexican go 8th with an 18.466.

As the clock ticks down all bar Verstappen, Tsunoda and Giovinazzi are on track.