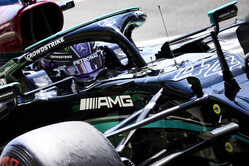 While the usual suspects in the media continue to focus on the possibility of repercussions following the events of two weeks ago, the rest of us are merely excited by the fact that in this morning's session Lewis Hamilton edged out Max Verstappen by just 0.088s.

Should it remain this close this afternoon we can expect the pair to fill the front row tomorrow and continue their battle.

What we want for the remainder of the season is the sort of excitement and thrill witnessed in those first few corners at Silverstone, not the utter shambles it subsequently became.

Though Hamilton topped the timesheets, teammate Bottas has looked good in every session - on every compound - while Perez has struggled and is unlikely to be able to offer Verstappen the support he will need tomorrow.

Though Alpine appeared to be best of the rest yesterday, today Ferrari looks set to assume the role, though McLaren, as ever, is there or thereabouts.

The Hungaroring is notorious for the fact that it is difficult - but not impossible to overtake on - indeed it was regarded as difficult long before it became the go to excuse for processional races.

Consequently, qualifying well is vital here, for the further back you start the harder your afternoon will be.

Though this morning's session didn't witness the number of incidents we saw yesterday, it remains a challenge, the wind and seemingly ever changing grip conditions making things difficult for all.

Hungary can usually be relied on to spring a surprise or two and other than who might fail to make it past Q1, or Q2, there is the question of giant-killers such as Russell making to Q3.

As Q1 gets underway the screens are still in place outside Schumacher's garage, the German having crashed out of this morning's session.

Tsunoda is first out, the AlphaTauri sporting softs. He is followed by Raikkonen, Giovinazzi and Mazepin.

As more drivers emerge, among them are Hamilton, Bottas and Verstappen.

Bottas and Hamilton trade fastest sector times, the Finn finally crossing the line at 16.610. Hamilton responds with a 16.424.

Gasly goes fourth (16.874), ahead of Norris, Ricciardo, Raikkonen and Giovinazzi.

No sooner has Leclerc gone sixth than he is demoted by his Ferrari teammate who posts a 16.649 to go fourth.

However, on his cool down lap Sainz appears to impede Gasly who was on a hot lap.

With 5 minutes remaining, Russell remains 17th, 2.038s off the pace, whilst Perez has slipped down to 9th.

Whilst Verstappen stays put, the Mercedes pair head out again, Vettel desperate to overtake Hamilton as they head out on to the track. Norris also heads out, though his sixth place appears safe.

Haas confirms - as if we didn't know - that Schumacher will not be coming out to play.

PBs in the opening sector for a number of drivers but no big surprises.

And so to the all-important Q2, the phase decides which tyres the leading ten will start tomorrow's race on.

Bottas is first out, followed by his teammate and Verstappen. Perez and Raikkonen are also keen to get to work.

While the Bulls and Black Arrows are on mediums, the rest are on softs.

A 16.972 sees Vettel go third, as Gasly goes fourth and Norris seventh, the McLaren driver quickest of all in S3.

"I crashed, sorry guys," he reports as the session is red-flagged.

As was often the case yesterday, the crash appeared to be a combination of poor rear grip and the wind.

With the clock stopped at 06:39 remaining, Sainz and Giovinazzi have not posted times, while Norris, Stroll and Raikkonen are in the drop zone.

Perhaps tellingly, Leclerc reports that his car felt more "twitchy" than in Q1.

The session resumes but there is no immediate rush to action.

With 03:45 remaining, Leclerc breaks the deadlock, the Ferrari followed by Gasly, Alonso and Bottas.

While Perez and Verstappen switch to softs, as does Hamilton, Bottas sticks with the mediums.

Again Leclerc is quick in S2, but again the Red Bull driver is quicker.

Norris goes second and Vettel tenth, which drops Ricciardo into the drop zone.

In the midst of all that Hamilton dropped to sixth and Bottas eighth. However, the Mercedes pair will start on the mediums, while the Bulls will be on softs.