Verstappen hits out at media 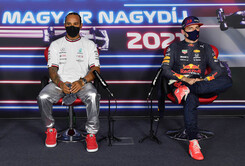 While Toto Wolff and Christian Horner may want to move on from the events of two weeks ago - even though they still appear to have plenty to say on the matter - the media cannot leave it alone.

"We’re not going to concentrate too much on Hamilton and Verstappen," promised Sky Sport's David Croft on Friday, before almost hysterically adding... "but could it happen again… will it happen again?"

Fact is, after years of domination by one man and his team, not only does that man have a serious challenger, there appears to be a little needle between them.

Since the threat from Max Verstappen and Red Bull became a little more serious, there have been various accusations from Mercedes about all manner of things, including rear wings, engine upgrades and even pit stops.

However, at Silverstone, whatever way you look at it, it spilled over into something else, and for sections of the media, in particular, it was manna from heaven.

After all, what better way to sell the show than to push the antagonism the two combatants seemingly have for one another.

From the moment the Hungarian Grand Prix weekend got underway broadcasters have been salivating about that "run to the first corner", licking their lips at the thought of every contentious metre from the start line to the apex, bristling at the thought of the further possibilities offered by Turns 2 and 3.

Though Verstappen didn't get on to the front row - which will surely add to his frustration, right? - he is on the softer tyres, and therefore has a short-term advantage.

At the post-qualifying press conference it was inevitable that the question would be asked. "There's been a lot of talk about what happened on the opening lap at Silverstone... if you two end up wheel-to-wheel after the start tomorrow..."

Sadly, Verstappen wasn't in the mood to play the game.

"Can we just already stop about this," snapped the Dutchman, "because it's... we've had so many f***ing questions about this.

"It's just ridiculous, honestly," he continued. "Honestly, the whole Thursday we've been answering this stupid s**t all the time.

"So can we just stop about it please? We are racers. We will race. And of course we are going to race hard but fair. We'll just be pushing each other."

Clearly disappointed with the reaction, the host turned his attention to Lewis Hamilton, who refused to respond.

Continuing to push their agenda, other than that "scramble to the first corner", much was being made of the booing of Hamilton by sections of the crowd in reaction to the Briton's perfectly legal gamesmanship. Indeed, Toto Wolff even described the booing as "racist".

While sections of the media are clearly stirring the s**t, the likes of Wolff, Horner and Helmut Marko are not helping, indeed both were in it up to their elbows long before Copse.

We are constantly told that F1 is about entertainment, it's a show... and like the very best movies and pantomimes, they need a hero and a villain.

Two drivers seemingly at one another's throats will have more people tuning in today than the mutual back-slapping witnessed in recent years.

However, on a day a marshal - one of the volunteers without whom motor sport couldn't happen - was killed at Brands Hatch, one must never forget that entertainment or not, motor racing is dangerous.