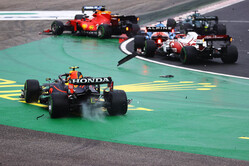 Now, while we refuse to sink to the sort of language used by Max Verstappen in the press conference yesterday, those pesky Weather Gods are surely taking the p***!

All week long we've been promised heavy rain, thunderstorms even, but instead we've had bright sunshine and record temperatures.

Then, overnight, the skies opened up only to give way to bright sunshine again.

Now, ahead of today's race we are still promised a storm or two, but once the flag has fallen.

While we might not be able to rely on the Weather Gods, at least we can anticipate a genuine battle of nerves in today's Hungarian Grand Prix.

Still seething following Lewis Hamilton's move at Silverstone, not to mention his antics in Q3 yesterday, the gloves will be off as far as Verstappen is concerned, while the world champion will be equally keen to put the young upstart in his place.

This is the fight we've been waiting for, the underlying bad feeling finally rising to the surface and erupting like a pus-filled pimple. Today, and hopefully beyond, it's war, the gloves off and ripped to shreds.

Woah! Hold on, we were getting carried away... Sorry about that, but suddenly we found ourselves caught up in the hyperbole and hysteria that has infected the media over the last couple of weeks... please forgive us.

OK, putting all the bullsh** aside, we do have the prospect of an interesting race for while Mercedes has clearly found some much-needed pace and consequently dominates the front row, the Bulls are on the faster, softer tyre.

However, any advantage offered by the red-banded rubber is extremely short-lived, therefore the Bulls must take advantage at the start heading into Turn 1... but let's not go down that route again.

While the media centre - which for some strange reason is populated this weekend by a number of journos who have barely covered the sport before - concentrate on those first 618 metres, it is the battle raging behind that excites.

Red Bull and Verstappen know that there are still at least ten races so the title will not be won here, so the Dutchman would be best served by letting his title rival get on with it. After all, another DNQ would be catastrophic.

Hamilton has his good old reliable wingman Valtteri on duty, so it is likely the Finn will ride shotgun whilst his teammate disappears into the distance.

Having taken on his third engine of the season, Verstappen is aware that there will be grid penalties further down the line, so, if only for that reason alone, he would do well to remember the adage; softly, softly catchee monkey.

Furthermore, with both seats still not secured, Perez and Bottas would both do well to play the good servant today.

And so to the midfield, where Gasly starts ahead of Norris, Leclerc, Ocon, Alonso, Vettel and Ricciardo, with Sainz a lowly 15th. Surely that is the sort of grid order Ross Brawn and his wretched Sprint was hoping for.

Though the Hungaroring has produced some massive yawn-fests over the years, it has also witnessed more than its fair share of great moves, it is a circuit that rewards the brave.

However, as we reflect on the madness of the last two weeks, are we alone in hoping that we can at least get through the afternoon without any controversy and mud-slinging.

And if those Weather Gods should be listening...

In terms of strategy, it is finely balanced between a one-stop and a two-stop strategy, with both approaches valid for the race, but a two-stopper being quickest on paper.

A lot will depend on two factors: starting tyres and temperatures. Those starting on the softs could favour a two-stopper, with a number of potential options involving a switch to the mediums for the last two stints or possibly even a final run on the soft tyre at the end of the race - especially if there is scope to score an extra championship point for fastest lap. Using all three compounds is another viable possibility.

However, with the notorious difficulty of overtaking, track position is key; so this could encourage more drivers towards a one-stopper. Those starting on the mediums can definitely make that strategy work, by switching to the hards for the remainder of the race. But soft to hard is also possible, although slower.

As ever, the weather will probably be a deciding factor. Up to now, there have been record track temperatures, and the predicted rain has so far failed to materialise.

The pitlane opens, and suddenly it has clouded over... could it? Will it?

One by one they head out, among the first is Verstappen with his new engine.

The drivers take their places on the grid, and they climb from the cars the first spits of rain begin to fall.

"Change in climatic conditions," race control helpfully advises.
The drivers gather for the national anthem, without any doubt, the most emotive on the F1 schedule.

"Risk of rain is 100%," advises race control as members of the Ferrari crew change the brake shroud on the front-left of Leclerc's car.

Giovinazzi is advised that "this intensity" of rain will last for the next half hour. That said, it is not that intense.

However, all are starting on inters. However, Hamilton reports: "If it stays like this, it is not inters. It is very much slicks."

Stroll is told that after 25 minutes at the current intensity it will get heavier before easing off and drying out.

Giovinazzi pits ahead of the start, though it is not clear why.

They're away! Hamilton gets away well, but not Bottas who finds himself with Verstappen passing to his left and Norris to his right. Indeed, as the McLaren and Red Bull get ahead of the Mercedes, Perez and Gasly appear to catch him on the hop.

As they head into Turn 1 it's disaster as Bottas loses wet and slides into Norris from behind who then slides into Verstappen, while Bottas then careers into Perez, forcing Gasly to take avoiding action.

Moments later, Stroll, looking to take advantage of the mayhem on the outer edge of the corner, goes down the inside but hits Leclerc who then hits Ricciardo sending the McLaren into a spin and facing in the wrong direction.

The safety car is deployed as Bottas and Leclerc climb from their cars, with Stroll also out.

Pitting at the end of the lap, Norris is released into the path of Giovinazzi.

After 2 laps the race is finally red-flagged as Verstappen is told he has a broken bargeboard. "The whole thing," he replies.

The field head into the pits, with Verstappen down in 13th position.

Understandably, the various incidents are under investigation.