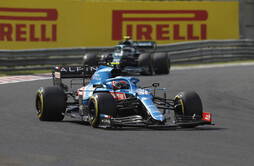 Alpine driver Esteban Ocon took his first ever Formula 1 win at a dramatic Hungarian Grand Prix, which originally started with all the field (apart from Alfa Romeo's Antonio Giovinazzi) on Cinturato Green intermediates in wet conditions. A collision at the first corner brought out a red flag, during which teams were allowed to change tyres and repair any damage.

Mercedes driver Lewis Hamilton, who led the field away for the re-start, was the only competitor to keep the intermediates and start from the grid, while all the other drivers came into the pits for medium tyres. Hamilton then pitted for mediums too at the end of the first racing lap following the re-start, rejoining last but eventually finishing third after an early switch to hard followed by a final run on mediums.

Ocon effectively re-started on the P Zero Yellow medium C3 tyre after the second formation lap and then switched to the P Zero White hard C2 on lap 37, one lap after Aston Martin's Sebastian Vettel, who finished a close second on an identical strategy.

After record-breaking temperatures on Friday and warm conditions yesterday, the weather completely changed today with rain and 28 degrees ambient, plus 32 degrees of track temperature at the start of the race. The track then warmed up considerably after few laps, peaking at 40 degrees of asphalt temperature.

Mario Isola: "Even before the race start it was hard to make any predictions, so the race began as a complete step into the unknown today, with the drivers having no reference point for the conditions they faced this afternoon. The amount of water meant that the intermediates were the clear choice to originally start the race with, but with the track drying rapidly following the red flag delay, it effectively became a dry race after the re-start. If we just consider this as the 'real' race, some drivers selected a medium-hard one-stopper while others like Hamilton and Verstappen – who were running out of position due to the unusual race circumstances – went for a two-stop 'sprint' strategy. Congratulations to Esteban Ocon and Alpine for their first win."