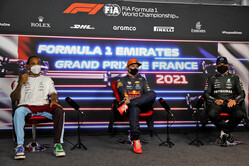 Max, congratulations, another pole position, but that must feel great given the end that happened in Baku when you were leading the race? What a way to come back.
Max Verstappen: Yeah, so far it has been a really positive weekend on a track where normally it's been a bit difficult for us. I think yesterday FP2 was a bit of a turnaround and it just made it even better today so of course to get pole position was really nice.

How satisfied are you with the performance you have got? As you say, Mercedes normally dominate around here but this keeps the championship alive doesn't it?
MV: Yeah, I mean of course no points scored today, but for us a great day and of course we have to finish it off tomorrow and try to get 25 points that we lost in Baku, but yeah it's great promise from our side and I hope we can keep it up.

Are you confident in the race car you have got under you?
MV: Yeah, I am actually. The car felt good yesterday in FP2, so looking forward to it.

Valtteri, a very solid weekend from yourself. Obviously you just missed out on P2 there but you must be happy with how everything has gone on the back of what happened last time out?
Valtteri Bottas: It's been a strong weekend and for sure a lot better than a couple of weeks ago and the pace has been there and we've seen that it is going to be close with Red Bull, as it was today. The qualifying, the last run in Q3 felt good and I didn't really feel like there was that much more lap time to get. I can't be too happy being third because it's been a strong weekend otherwise, but I think Red Bull was faster today.

Was there anything during your lap you could have done better to get that battle further up?
VB: The first lap in Q3 I had a bit of a snap in Turn 2, so that was not a good lap, but the second lap was good. So I'm keen to find out where we lacked some speed.

Congratulations Lewis you line up second on the grid. It looks like it has been a tough weekend from the outside but you got the job done at the end when you had to and got on the front row?
Lewis Hamilton: Can I just start by saying hi to everyone? We've got British flags and so many people here and it warms my heart to see people coming together finally after this difficult period for us all. No, it's been a really, really hard weekend, mentally, not physically, but just trying to get the car into a happy place. You wouldn't believe how many changes I have made since practice one, going round and round chasing our tails and ended up coming back to something similar to where we started. But I've generally been unhappy in the car all weekend and I saw you coming out with some myth and I was happy to be able to prove it wrong. The quality of our engineers' work, all the cars are exactly the same. Congratulations to Max, he did a great job today. They have been incredibly quick. You see they have got a new engine this weekend. Not a new spec or anything, as far as I am aware, but they are quick down the straight. I think it was a lot of time on the straights today. We have got a race on our hands and we are loving the battle so we are going to keep pushing, keep fighting and giving it everything.

As you say, you've got a tough day tomorrow. How confident are you that you've got a strong car to go into the race tomorrow?
LH: Well, in practice it was a real struggle and on long run pace I think they were a tenth or two quicker than us. But my car is in a much different place now so I am just going to stay hopeful and do everything I can. Obviously in second you have a fighting chance down at least to Turn 1. There's going to be some interesting strategy tomorrow. I don't know, probably tomorrow it will rain, so you will potentially get to see the rain masters do their thing. Yeah, I'm excited.

Max, many congratulations, what a tremendous lap by you at the end of Q3. Just how good was the lap and how good was the car?
MV: Yeah, I think from yesterday, FP2, we made a good step forward and basically that continued today. Of course the conditions in FP3 were initially a little bit different but then again it showed in qualifying that we had good pace. Very pleased with that. This has traditionally not been an amazing track for us so to put it on pole of course we are super happy about that.

It has been a Mercedes track in the past so how much confidence does this performance give you?
MV: I knew it was going to be better than the last time we were here but this good I didn't expect so that's promising for us and yeah, we just have to keep on going, keep on pushing to try to make it better.

And prospects for the race?
MV: It felt good yesterday in FP2, but of course we have to wait and see what the weather will do in the morning but I'm quite confident.

Well done. Lewis, how easy was it for you to extract that time from the car?
LH: It wasn't easy at all. From my side I just struggled with the car all weekend. Really uncomfortable with the balance and I was making all these changes and it really wasn't making much difference, I was still struggling. We've been back and forth, back and forth. Eventually we made some changes, like literally 10 minutes before the session and said like: 'let's go with it and see what we can do'. It was a really clean session though for me. Every lap was good. I didn't make any mistakes and it was one of my cleanest sessions in terms of just steady, good laps and my last one was the best one I could do and it was as fast as I could go. Valtteri has been really strong all weekend as well. Generally really happy with it.

And with all the changes you've made to the car, does that make you a little bit nervous for the race - or how confident are you?
LH: I'm not nervous for the race, just because it wasn't great yesterday, wasn't great this morning and then in quali it was much, much better. I think it will be good tomorrow. Generally yesterday they were quicker than us on the long runs so it's going to be a challenge to follow but you know, there's lots of opportunities tomorrow hopefully.

Talking about that Q3 session, you made a big gain between your first and your second runs. Can you just talk us through that?
LH: In Q3? The first lap, as I said, was really good. Great banker lap. Obviously disappointed to be over three-tenths down to Max. I think I was one of the last cars on the track, if not the last car on the track. We went back out and I was able to improve. All the areas I made a small change between the runs, just was improving bit by bit through the lap. So, I was chasing that three-tenths but not knowing that he had obviously gone another couple of tenths quicker than that. So, great job from him and his team and I'm really proud of my team for just keeping their heads down, not getting too shaken up by all the commotion that's been going on in the background, trying to get the car to where it needs to be.

Valtteri, coming to you, well done as well. What was your car like to drive? Have you been struggling with it in the same way that Lewis has this weekend?
VB: Not really. I think the weekend started in a pretty good place and kind of tuning it from there. At any point of the weekend I didn't really have to make any huge changes, so it's been really fine-tuning, and the same things for qualifying. There are a couple of corners I still struggle a bit with the balance but you know, with the wind and so many different tyres of corners, it's never going to be perfect - but I was reasonably happy with the car and actually quite disappointed to be third - because it's been otherwise a strong weekend and I really thought we could fight for the pole - but I think Red Bull and Max just had bit of an upper hand in the quali spec.

And Valtteri, it was a difficult weekend for you last time out in Baku. How happy are you to be bouncing back this weekend and to be in the top three here?
VB: It's obviously a lot better than Baku so far, and yeah, so it's been a strong weekend, just in Q3, the last lap, I felt was good, so keen to see why I missed a bit of time against Lewis. And, you know, the race is tomorrow. I'm sure we can fight well with Red Bull and we can fight for the win, so I look forward to that.