Verstappen takes it to the max in final practice 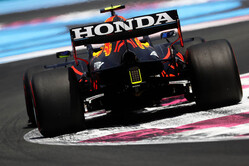 Ahead of today's sole free practice session, the air temperature is 25.2 degrees C, while the track temperature is 37.8 degrees. It is cloudy and somewhat muggy. However, according to race control, there is 0% chance of rain.

Valtteri Bottas topped the timesheets in yesterday morning's session, while Max Verstappen led the way in the afternoon.

Interestingly, the Mercedes pair failed to improve when switching to the soft rubber, which should add to the drama when it comes to qualifying.

Talking of drama, much of the excitement yesterday centred on the kerbs, with Mercedes and Red Bull both complaining that the drivers incurred by their drivers running wide was costing serious money.

The FIA's reaction was much as you would expect and the kerbs remain in place this morning.

Behind the leaders, Fernando Alonso looked strong, as did teammate Esteban Ocon and countryman Pierre Gasly. Both Alfa Romeo drivers were also in the top ten.

The lights go green but it is several minutes - indeed eleven - before an engine fires up, it is the Ferrari in the back of Mazepin's Haas. He is subsequently joined by his teammate.

As the Haas pair begin their flying laps, Ocon, Raikkonen, Alonso and Perez head out.

As Mazepin goes off at the exit of Turn 1, taking a long, long, long trip over the run-offs, Ricciardo splits the Alpines with a 33.592.

As Mazepin makes his way back to the pits, the damage to his front left from the run-off strips is painfully obvious.

Norris is the first driver to have his time deleted for exceeding the limits at Turn 6.

Interestingly, the Aston Martin pair are the only drivers to opt for a compound other than the softs, both drivers are on hards.

Leclerc goes fourth, ahead of Perez, Raikkonen and Russell as the big guns head out.

After 27 minutes all bar Sainz and Gasly have posted times, though both are on track.

Perez complains of vibrations, which the team confirms from its data.

Bottas and Verstappen trade fastest sectors, the Finn improves to 32.309 but the Red Bull star responds with a 32.024. However, Verstappen has his timer deleted for exceeding the limits at Turn 6.

Giovinazzi improves to tenth with a 33.586 but has his time deleted.

Gasly leapfrogs Alonso with a 33.154, however the Spaniard's early time is still looking remarkably good.

On the hards, Vettel is currently 13th and his Aston Martin teammate 17th.

With 21 minutes remaining, both Mercedes drivers switch to fresh softs as the qualifying sims get underway.

The Bulls head out.

Perez goes third with a 32.238, the Mexican having benefitted from tows on two different parts of the circuit.

Down in fifth, the frustration appears to be getting to Hamilton as he seeks to improve but his tyres won't have it. Consequently he remains fifth, 0.966s off Verstappen's pace.

A close encounter of the worst kind as the Haas pair almost trip over a slow Sainz.

"Why is there so much understeer after we change the front wing," demands Tsunoda. The youngster subsequently improves to twelfth only to have his time deleted.

A third flying lap on the same set of softs sees Sainz post a 32.560 only 0.3s off his previous best, though the time is subsequently deleted.