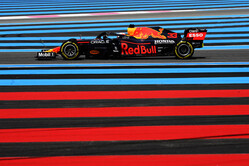 For once Red Bull and Mercedes appear to be in total agreement, as they question the damage being caused by Paul Ricard's unforgiving kerbs.

"We've just done a shed-load of damage to our car," said Wheatley, "and pretty sure Max didn't end up there on purpose.

"It just seems to be such a huge penalty for a minor indiscretion on the drivers' part," he continued. "I was wondering whether you would consider... I don't know, removing half of them.

"Those yellow rumble strips on the exit of 2 have done an awful lot of damage to our car," said Meadows after Valtteri Bottas ran wide in Turn 2. "They're just too aggressive."

"They're the 60mm ones that we normally have in a lot of places, Ron," replied Masi, "and they were actually there in 2019."

"It's a bit more than three-foot, but I'll have a look, thank you," responded Masi in the sort of tone a mother uses when her child complains they feel ill after eating too many sweets.

"We shouldn't have kerb damage destroy a car, in my opinion," said Guenther Steiner, a team boss with every right to be fearful of the potential damage seeing as his line-up includes Nikita Mazepin.

"If you know it damages a car, why do we have them there?" he asked. "To know that something is on the racetrack which damages the car, we should be smarter than that."

When it was pointed out that we have just come from two tracks where walls and barriers define the track limits, the Italian replied: "Should we put barriers around the race tracks and then for sure we wouldn't go in them, because we destroy the car completely?

"There are other places where you go off the track limits and you lose time but you don't destroy your car. That's what it should be."

At one stage, after Max Verstappen's off, Red Bull asked Masi if the piece of bodywork shed in the process could be returned, though this was thought to relate more to rivals getting a closer look at the piece of front wing rather than anything else.