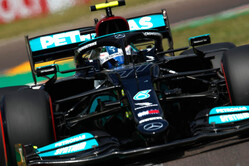 In a pre-planned move, Lewis Hamilton and Valtteri Bottas are to swap chassis for this weekend's French Grand Prix.

Insisting that the move, which will see Bottas at the wheel of #6, the chassis teammate Hamilton drove in Baku, and the world champion in #4, is not a result of his nightmare outing in Azerbaijan.

"It's not a new chassis, it's different and it was always planned for me to change to a different chassis at this point," said the Finn.

In the wake of his Baku performance, Bottas admitted: "I can't remember having this kind of weekend before. Yes, there were a few weekends when I've had bad sessions but always, at some point, I had the pace.

"But this weekend it's been all the time like this, and during the whole weekend I still haven't understood what is wrong. I know myself where's the limit and I cannot go faster than this, and then you're still six, seven, eight tenths behind. It's not normal, so it's something we need to understand before going to France."

Following his drive to third in Spain, Bottas has suffered back-to-back nightmare weekends, with his wheelnut saga in Monaco and his inexplicably disastrous outing in Baku.

Looking ahead, Bottas, for whom this will be his third different chassis of the season, having badly damaged his original in the clash with George Russell at Imola, believes the move back to a more "normal" circuit will prove beneficial.

"We saw that in Monaco, for me, I managed to find the set-up and the confidence and get the tyres to work and Lewis didn't. It almost felt like vice-versa in Baku," he said.

"I think our car is quite on a knife-edge on those kind of tracks. But I think at least the next few tracks it's a bit more normal and hopefully we can get a reasonable set-up and that it's not that easy to go into the wrong direction."

Looking ahead, if Valtteri really wants to retain his seat for 2022 it might be an idea to swap helmets with Hamilton also.