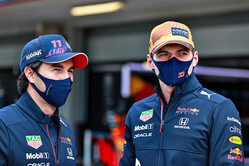 You've won your first Formula One race for Red Bull Racing Honda. Has it sunk in and how do you feel?
Sergio Perez: I feel very, very proud. It's a victory that really shows the amount of work that we've all put in since the start of January and shows how hard work always pays off. It's also a great boost for the whole team to know that we've got two cars that can fight for the championship and that we all really want to win.

What was going through your head during the red flag period in Baku when you were told we'd have a standing re-start?
SP: I thought that I had everything to lose, it's only two laps, I'm on pole and it's our race to be lost. So I just tried to do the perfect start and for many reasons that didn't happen but in the end I think we got lucky because who knows what would have happened if we got a good start with Lewis having issues with his brakes, so in the end it all worked out. I spoke with Stefano after the race and told him "you guys really like the show!" and he said "well this is fantastic for the fans".

Max was hugely unlucky to suffer a tyre failure whilst leading the race, but it was great to see him come down to the podium to support you and Alex also messaged you his congratulations. How strong and tight is the Team feeling here at Red Bull Racing Honda?
SP: I think we've got a pretty good Team! I think what Max did was great to see, he really deserved the win and he did everything perfectly that weekend, he was just very unlucky. Alex as well is putting so much work into the simulator and with the engineers. I remember when I came here, I didn't expect him to be so open but he explained how the car works and that was very nice to have him around since day one. So I really appreciated that and I appreciate the work that he's doing with the Team.

We've extended our lead in the Constructors' Championship and you've jumped to third in the Drivers' standings. How are you feeling going into the French Grand Prix?
SP: It's only race six and as I say it doesn't really matter where we are now it's where we finish in Abu Dhabi so we just have to keep chipping away, making sure we maximise our car potential. I've been in Formula One for many years that I know that so many things can happen, so we just have to keep our heads down, now what has happened is history and we just have to keep looking forwards.

Baku was a rollercoaster of a race for you and the Team. How do you feel reflecting on the race weekend?
Max Verstappen: Of course I would have liked to have won and it's fair to say that we were on course to win in Baku, but that's racing and these things happen. Sometimes it's out of your hands so we just have to keep going and move on. We are still leading the championship and of course I would like to be leading with more points but it is what it is.

You're still at the top of the drivers' championship and we've extended our lead in the constructor's. How are you feeling going into the French Grand Prix?
MV: I'm feeling good but I'm sure that Mercedes will be very strong on the 'normal' tracks again, so we have to keep pushing and keep improving right to the very end because it's never enough. So far the season has been pretty good to us but we need to remember that there are still a lot of races ahead of us. I am happy with the race results that we have had so far and that we are leading the championship, but we also have to be there leading it in Abu Dhabi, that's all that matters.

Tell us about the Circuit Paul Ricard, is it a track that you think we will perform well at?
MV: The Circuit Paul Ricard is a fast track. There are a fast few corners towards the end of the lap and you also have to be quite careful with tyre degradation. There's also a lot of run off so sometimes it's a bit weird because there is so much space, which is of course completely different than the two street circuits we've just been to. I'm looking forward to going back there and hopefully stepping on the top step of the podium.

• Red Bull have never led a lap at Paul Ricard, but Honda have led more laps at this venue than any other power unit manufacturer (343), more than three times as many as any other manufacturer on the 2021 grid (Mercedes are next, on 105)

• The Red Bull Racing Honda pit crew changed all four tyres on Max Verstappen's car in 1.98s in Baku, their third pitstop this season under two seconds in duration, and the 12th pitstop under two seconds since the start of 2020. In the same timeframe no other team has achieved this once

• Were Max Verstappen permitted to drive at his average race speed in the 2019 French Grand Prix, he would arrive home in Monaco - which is only 185 kilometres away - in under 51 minutes