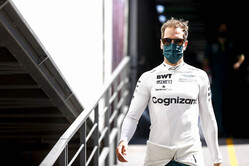 Grand Prix racing was born in France, and the French Grand Prix has enjoyed many different homes since it first joined the calendar in 1950. A mainstay throughout the 1970s and '80s, the Circuit Paul Ricard has become one of the most popular circuits in the world for validating car set-up. Reaching almost 300km/h (217mph) along the legendary Mistral Straight before pulling 5G through the snaking Beausset curve, Paul Ricard is a true test of car and driver.

Lance: "My race in Baku ended in disappointment, but the whole team can take positives from our race pace and the boost Sebastian's podium gave us all. I'm determined to bounce back strongly in France. Paul Ricard is a good all-rounder and tests every aspect of a Formula One car, so I'm looking forward to seeing how the AMR21 performs this weekend."

Sebastian: "I think we're coming into this race on a high after the success of Baku. There's been time to celebrate, but now I'm fully focused on maintaining our momentum in France. We've brought home a decent points haul in Monaco and Azerbaijan, and we need to keep up the consistent form in what is proving to be an extremely close midfield battle this year."

• The French Grand Prix is traditionally a one-stop race, partly due to low degradation but also because of the heavy time-loss in the pits. Due to a pitlane speed-limit of 60km/h, drivers will lose roughly 24 seconds to a stop, which is three seconds more than last time out in Baku, and 20s at Monaco.

• Another reason that the race is likely to be a one-stopper is due to the Pirelli compounds. The Italian manufacturer is bringing its mid-range C2, C3 and C4 tyres to France. It's one step harder than the last two Grands Prix (Monaco and Baku), and the lack of tyre degradation means the quickest race strategy is a single stop.

• There were just 29 overtakes following the first lap of the 2019 French Grand Prix, which was below the average for dry-weather races that year. With cars so evenly matched, little degradation and historically few race-defining interruptions (2018 had a four-lap Safety Car at the start and a late Virtual Safety Car), passing is difficult.