"I'm over the moon," admits Vettel 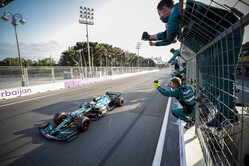 Scoring Aston Martin's first ever F1 podium, an over the moon Sebastian Vettel admits that tyre management was the key to his Baku race.

Missing out on a top ten start, at the end of Saturday's qualifying session Sebastian Vettel's frustration was all too obvious. "Arggghhh," he screamed over the radio.

However, starting on new softs, the four-time world champion made up two places on the opening lap.

As the race continued he gradually made his way up the order and having been extremely kind to his tyres, thereby allowing him to extend his opening stint, when the big guns began making their pit stops he was leading the race.

After being passed by Max Verstappen, Vettel subsequently pitted, rejoining in seventh, a position he held for a further 11 laps.

At the restart that followed Lance Stroll's crash, the German made short work of Charles Leclerc and Pierre Gasly, moving up to fourth, a position he held until Max Verstappen's crash.

Suddenly, ahead of the second restart, Vettel was looking at a podium.

Then, courtesy of Hamilton's magic issue, the German moved up to second and a place in Aston Martin history.

"I'm over the moon for the team, it's great," he grinned. "Obviously, a podium... we didn't expect that when we came here.

"This means a great deal," he admitted. "It's been a tough start for us, and I think it was a great race. I felt good in the car, and combined with on-track events and strategy, we were able to get a really special result.

"Strategy-wise obviously it's always better to start further up," he said of the afternoon's events and the fact that he started on fresh softs. "The new tyre for sure didn't hurt, because other people had a couple of laps on from qualifying.

"Obviously, I had a good start," he continued, "made up some positions right straight away, then looked after my tyres as soon as everybody went to the pits.

"So it helped us to go longer, but we really preserve the tyres well and I think that was the secret, plus the pace that we had. I think in the race the car felt good and it was the key to keep progressing and chipping forward.

"On Friday, even though we were nowhere, it felt good," he admitted. "I was quite relaxed. Yesterday, we didn't quite get it. But today is even sweeter."