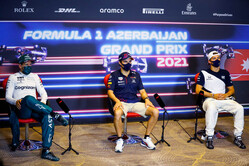 Pierre Gasly, another podium - outstanding! How does it feel?
Pierre Gasly: Incredible. Honestly, I don't really know what to say. It was such an insane race and a super intense last two laps. The car has been incredible all weekend and we showed every session we were there. Qualifying was mega. I didn't know if we could keep up that position or fight for even a podium and in the end we did it. You know, I finished already once first, once second and I missed that third place so it feels incredible to get that podium.

What a battle you had, we're just seeing it in the background, with Charles Leclerc on the last lap as you started. He passed you, you passed him back and you got your muscles out?
PG: We had to get the elbows out. It was a very difficult race from mid-race onwards, we had an engine issues so we were losing quite a lot of power down the straights. Seb managed to pass us in the middle of the race and I knew these last two laps were going to be very difficult with Charles behind and you know I tried it, every braking. I wasn't sure if I was going to stop the car but I had to go for it. I really wanted that podium and it really feels incredible after such a good weekend.

There'll be some nice celebrations tonight with the team?
PG: Yeah, exactly. Some very good points. I'm very happy. Yuki did a good race as well. All in all, a fantastic job and hopefully we can celebrate all together tonight.

Sebastian, something has clicked in the last couple of races. P2, a first Aston Martin podium since they've come back to Formula 1. What does this mean to the team?
Sebastian Vettel: I think it means a great deal. Obviously it's been a tough start for us and yeah, I think it was a great race. We had good pace; that was key. I had a good start, made some positions straight away, looked after my tyres as soon as everybody went to the pits. I had really good pace to overcut I think Yuki at least and then obviously the re-start worked brilliantly for me and got another two positions there. Yeah, we obviously had fresher tyres, which I guess helped, warming up the tyres later on. Yeah, a great day. I'm over the moon. For the team it's great, obviously, a podium. We didn't expect that when we came here. Already on Friday, even though we were nowhere, it felt good. I was quite relaxed. Yesterday we didn't quite it but today, even sweeter.

I want to talk about yesterday, because you had a brand new set of soft tyres for that small dash?
SV: Strategy-wise obviously it's always better to start further up but that new tyre for sure didn't hurt because other people had a couple of laps on from qualifying so it helped us to go longer but we really preserved the tyres while and that was the secret, plus the pace that we had. I think in the race as I said the car felt good and that was the key to keep progressing and chipping forward.

Checo, another race win, with Red Bull. What a mad race that was.
Sergio Perez: Yeah, I'm so happy for today. The race, normally Baku is pretty crazy. First of all, I have to say I'm very sorry for Max, because he did a tremendous race and deserved to win, and it would have been incredible to get the one-two for the team. But in the end it is a fantastic day for us. We were close to retire the car but luckily we managed to finish the race. It was quite difficult all the way to the end.

You had a seven-time world champion pushing you all the way through the stints and then when it came down to the restart, tell me what you were thinking when you line up for that restart, what you were going to do?
SP: He had strong pace throughout the race. I think we had a bit of a slow stop as well, so the overcut came a bit closer to him but he just pushed me from lap one onwards. I had the pressure from him pretty much since the beginning. Then at the restart, I had a poor start, so he was alongside me but I was like "I'm not going to miss it" you know. I braked as late as I possible could and he did the same but it didn't work for him. At least it is a good day for the team.

Has Checo clicked with this Red Bull car now? Can you go confident to the next race that you're going to be on the same performance?
SP: Yeah, this is definitely a strong boost of confidence for myself and the team.

Checo, many congratulations, what a day for you. Just how sweet was the view from the top step of the podium?
SP: Very, very sweet, of course. I want to start by saying big thanks to all my team. They have given ma massive opportunity. We didn't have the start of the season we were hoping for. I found my adaptation harder than expected but we have been working extremely hard since day one with the engineers back at the factory and yeah, finally we got a very good result for the team. We have been showing flashes of speed here and there. But I think this weekend everything was looking great until Q3 run one when we got it wrong. But we didn't let ourselves [get] down. We looked forward and we had a tremendous race, so yeah, I'm extremely pleased with the result today. This definitely gives a big boost of confidence to myself and also to my team, to my side of the garage. We have such a rollercoaster through the seasons, it's important to enjoy these moments.

Given everything you have just said, does this win feel different to the first one in Sakhir?
SP: Well, getting your first win in Formula 1 is something unbelievable but getting a first win with a new family, with a new team, I feel like it gets you together more. Sharing these moments together is something extremely special. We live for these moments and we are all here to enjoy those Sundays so yeah, it is extremely special. I don't have that many wins in my career but they all have been very special and today, I have to say the race throughout was flat out and very stressful mentally.

You had great pace throughout. Can I ask you about those last few laps? How nervous were you prior to the restart, about keeping the lead but also about the reliability of your car?
SP: Yeah, it was a big thing. The team asked me, basically, not to weave. I couldn't warm up the tyres at the restart, so we were trying just to get to the end, it was only two laps to go. It was our race to be lost, you know, because we were in the lead, there's everything to lose. Not much to win because we were on pole and we just have to do two laps. Getting that start right was a big things and I think we had pretty cold tyres for that restart. Lewis had a better one. I just tried to brake as late as possible. I was like "no way I'm losing this one". I just tried to brake as late as possible. Lewis was on the inside line, the dirty line and yeah, unfortunate for him. It just shows how vulnerable we are all to mistakes. We are operating at such a high level lap after lap that these things can happen to anyone.

Could you see Lewis' brakes smoking on the grid?
SP: I was more focused on my brakes to be honest.

SV: Why you were not allowed to weave?

PG: Because Max exploded the tyre.

SP: Because we had a concern about the rack.

Sebastian, what a race by you and Aston Martin. Starting 11th, what were your expectations prior to the start?
SV: Well, I didn't have many expectations, to be honest. I mean, I knew that the whole weekend I felt good, so I knew we can, you know score some points but I certainly didn't expect second and the race was really strong. We had a very good first stint. I saved the tyres in the beginning and stayed out longer than most of the people in front of me, which I think helped us later on because, at the restart I had, when the Safety Car came, I was obviously in the mix in P6 and had tyres that were ten laps fresher than everyone else's. So, probably easier to warm them up and it helped me at the restart to jump Charles and also Pierre. It was quite hairy into Turn Three and Charles was braver than I expected because I initially braked later than him but he opened the brakes and I thought, OK, for sure, he's going to hit the wall, so I prepared to get to the inside - but he made it. I don't know how, but he did. After that, I still had a good feeling on the lap after the restart to get him at the end of the lap and jump him there, so after that we were in fourth and could really go with the pace from the group in the front. Then, with the red flag, obviously it's a shame for Max to lose the lead like that. I don't know what happened. I think Lance had the same issue, the tyre just failing but I think for us, obviously, we then found ourselves in a good spot, in the podium ranks. As Checo said, just two laps to go so you just try to keep it together. I was again aggressive on the start and had a good start but nowhere to go and then I obviously saw that Lewis misjudged Turn One. Tried to stay a bit closer with Sergio maybe to do something after the first lap but I was too far away and obviously very happy with P2 and the team. I think it's great for us. We had a very rough start to the season. We expected quite a bit more after such a strong year the team had last year. Can't wait to get back to have a couple of drinks with the guys.