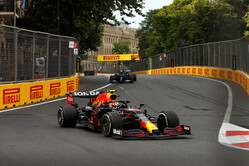 Red Bull driver Sergio Perez won with two stops, going from P Zero Red soft to P Zero White hard to soft again. The race was red flagged with just three laps to go following an accident for race leader Max Verstappen in the other Red Bull. Under the red flag regulations, the drivers were allowed to change tyres, which they all did before the final sprint.

Most drivers selected a soft to hard strategy before the red flag period, with all of them then selecting the soft tyre until the finish.

There was a safety car period just over halfway through the race, when Aston Martin driver Lance Stroll crashed close to the entrance of the pit lane, following a deflation of the rear-left tyre. When the pit lane re-opened, five drivers chose to make a second stop, fitting either the hard or the soft tyre.

Initial observations have already been made as to what could have caused these incidents affecting the rear-left tyre. None of the other tyres in the race of a similar (or older) age showed any signs of excessive wear, there was evidence of a cut found on another rear-left tyre fitted to Lewis Hamilton's car during the same stint, there was no warning or vibration detected prior to either incident, and the rear-left tyre is actually not the most stressed on this circuit. All of these considerations could point to an external factor.

Temperatures were somewhat cooler than they had been over the previous two days, with 26 degrees of ambient temperature and 39 degrees of track temperature when the race began.

Mario Isola: "We need to clearly establish the facts behind the incidents involving Lance Stroll and Max Verstappen to fully understand what happened. What we can say for now is that there was also a cut found on Hamilton's tyre and that it's the rear-right tyre that actually works harder than the rear-left here. No warnings or vibrations were detected and none of the other tyres of a similar age or older showed any signs of excess wear. So we can not exclude that the damage was caused by an external factor, although these things shouldn't happen and we can understand the need for answers."