"I do not deserve this, it sucks," insists Norris 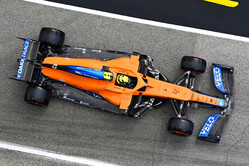 A furious Lando Norris insists that a reprimand would have been more appropriate for qualifying misdemeanour rather than grid drop and penalty points.

The Briton, currently third in the standings, was hit with a three-place grid drop and three penalty points on his licence after the Baku stewards deemed that he hadn't followed the appropriate procedure when qualifying was red-flagged after Antonio Giovinazzi crashed out.

The stoppage was one of four over the course of the hour, and in Norris' case the McLaren star was penalised for failing to stop at the earliest opportunity.

Norris' confusion arose because when he asked his engineer if he should pit, and was told "if you can, box", the Briton felt it was too late and consequently continued for another lap.

While the stewards understood the driver's confusion, they deemed the grid drop and penalty points were in order, making clear that under normal circumstances when a driver does not respect the red flag a five-place drop is the order of the day.

While the grid penalty drops him from sixth to ninth on the grid, the penalty points bring his 12 month total to 8, only 4 short of a race ban.

"I think a reprimand is the right thing to do," he added. "I did not put anyone in harm's way. If anything, I took the safer option out of boxing or not boxing.

"I feel like what I did was exactly the safest thing to do. For all I know the pit lane could've been blocked, and then you're not allowed to enter the pit lane and it could have been a different story.

"I did not have time to talk to my engineer and say should I box or should I not. I did everything I thought I should've done.

"It sucks because in the end there is a rule, but sometimes there is more leniency to certain situations when a driver has still done the best thing that is possible to do in that situation."