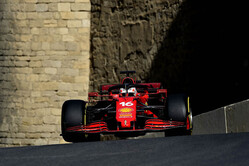 Unlike Monaco, grid position isn't absolutely vital here, and for proof of that look no further than 2017 when race winner, Daniel Ricciardo started from tenth on the grid.

That said, one wouldn't want to head into tomorrow's race facing such an uphill task.

Consequently the pressure is very much on Mercedes, which has been off the pace all weekend.

Granted, Lewis Hamilton was third quickest this morning, albeit courtesy of a "monster tow" from rival Sergio Perez. And while, Valtteri Bottas' best time was hardly indicative, it's fair to say that the W12 appears around half-a-second off the pace.

Max Verstappen crashed out, and while much will be made of this - feeling the pressure etc (yawn) - the Dutchman must head into today's session feeling quietly confident, as must his teammate.

However, it remains to be seen who might throw a spanner in the works, or spoil the Baku party, so to speak, for anyone of a number of drivers could spring a surprise this afternoon.

Step forward Messrs Gasly, Leclerc, Sainz or even Norris, for in as much as this morning was "incident-filled", so too this afternoon all manner of issues could come into play, be it brushes with the barriers or trips down the escape roads or spins, all of which could cause yellow flags, VSCs or red flags at the very worst of times.

Feeling confident following Antonio Giovinazzi's first point of the season in Monaco, Alfa Romeo is one of several teams looking to spring a surprise and benefit from any potential mayhem.

While Verstappen's car is ready to run, Williams have had to change the engine on Russell's car due to a water pump leak.

As the drivers head out into the pitlane, with Leclerc heading the queue, the Williams crew is still working on Russell's car.

In no time at all there are 15 drivers on track, all but the Mercedes pair on softs, the Black Arrows having opted for mediums.

An early problem for Stroll. When we say problem, we actually mean that his right-front wheel is hanging off.

As the replay reveals the Canadian hitting the barrier at the infamous Turn 15, the session is red flagged. Heading into the corner, his right front locked up, but rather than taking to the escape road he opted to try taking the corner with the inevitable result.

As it happens, only Leclerc has posted a time, the Ferrari driver stopping the clock at 42.532.

Swings and roundabouts, for the red flag has given Williams precious time in which to finish repairing Russell's car.

"Never good to see the red flag," says the Grove outfit, "but this one gives us a valuable few minutes for the team to work on George's car."

Ahead of the green light, Schumacher heads the queue, with Russell tucked in behind.

Verstappen is clearly frustrated as he is stuck behind the Alpine of Alonso. He backs up to create a gap only to fall into the clutches of teammate Perez.

Meanwhile, at Turn 15... Giovinazzi is in the barriers... the session is red flagged again.

With 09:20 remaining, only 10 drivers have posted times, the Mercedes pair are not among them, nor is Gasly or the McLaren pair.

Told he was a tenth off Verstappen's pace in S1, Hamilton replies: "I've just got to get a lap in".

Green light... and Latifi leads the way. Hamilton has reverted to the set of softs he used on his second run, having tried mediums earlier in the session. Likewise Bottas.

Norris is to be investigated for "red flag procedures".

The only driver opting not to go out again is Ocon.

As Russell goes eleventh (42.728), Hamilton crosses the line at 41.545 to go top, the Briton once again benefitting from a tow, this time from an AlphaTauri.

Though he's on the cusp, Norris escapes elimination by the skin of his teeth. Indeed, told to complete his current lap he continues and goes fifth with a 42.167.

"Can I go to the toilet quickly," asks Leclerc. We know the feeling.

The lights go green and Q2 gets underway. Vettel leads the way.

Replay shows some silliness in the pitlane, with Vettel being released into the path of the Red Bulls.

Verstappen goes third (41.765), ahead of Norris, Alonso and Vettel.

Hamilton aborts his lap in the second sector, while Bottas posts an exploratory 2:04.900.

"Asked if he is OK, there is a long pause before the Australian sheepishly replies: "Yep, OK."

All of which is bad news Vettel and Ocon who were on hot laps for the session is red flagged.