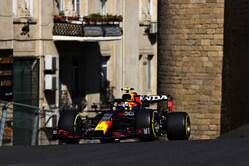 Interestingly, all Mercedes and Ferrari runners have new power units this weekend.

While there were no red flags earlier, the session was not without incident, a number of drivers either spinning or running wide and having to make use of the various, generous escape roads.

One such incident towards the end of the session, caused after Mazepin lost his Haas, meant that those drivers on hot laps had to abort.

Daniel Ricciardo appears to have put his miserable Monaco experience behind him, while teammate, Lando Norris was one of the many drivers to have a 'moment'.

In the latter stages of the session the wind was clearly an issue and this is expected to continue over the course of the weekend.

The lights go green and Ocon gets proceedings underway. He is followed by Raikkonen, Gasly and Giovinazzi. All are on mediums, seemingly the go-to tyre this weekend.

As more drivers head out, mediums are clearly the order of the day (afternoon), though Schumacher is on hards and Alonso on softs.

In no time at all, there are 20 drivers on track.

There are early moments for Bottas at Turn 1 and Norris at Turn 15, while Vettel spins at Turn 16.

Of the first wave, Sainz is quickest (44.072), ahead of Perez, Raikkonen, Leclerc and Gasly.

A 43.210 sees Leclerc go top, however, the Monegasque subsequently loses out to his Ferrari teammate (43.162).

Following a close encounter, Sainz and Mazepin have differing views in terms of who was responsible.

Out come the yellows after Latifi grinds to a halt at Turn 15.

The session is subsequently red flagged as the Williams is retrieved.

The session resumes, as Norris and Perez both request helmet changes.

As the drivers head out again, Tsunoda has an early moment at Turn 2.

Meanwhile, disaster for Leclerc who is in the barriers at Turn 15, the Ferrari driver having locked-up and headed nose first into the welcoming Tecpro. Though the car is damaged, he is able to continue back to the pits.

A 42.115 sees Perez go top, as Gasly is off at Turn 15. Moments later, teammate Verstappen, whose first lap on the softs was compromised, goes second with a 42.216.

Meanwhile, Verstappen complains of tyre graining, which, combined with traffic and the wind is not making life any easier for the Dutchman or his rivals.

With some sort of technical issue, Schumacher gingerly makes his way back to the pits.

"So much vibration I cannot see the mirrors," reports Mazepin. So, that's the reason.

On the long runs, the Red Bulls continue to set a good pace, the only drivers running in the 1:46s.

Told to find a setting on his steering wheel, Mazepin carries out the task successfully. On being congratulated for getting it right, he replies: "We're not in Monaco", a clear reference to his issues dealing with the most demanding of tracks.

Another moment for Tsunoda, this time at Turn 2, as Leclerc complains of "huge" graining at the rear.

On hards, Vettel is also setting a strong pace, as is Hamilton on mediums.

However, while his long run pace looks good, the single lap pace from the Mercedes is clearly lacking.

As was the case in Monaco, Red Bull and Ferrari clearly have the edge, while Gasly claims 'best of the rest' and McLaren appears to have fallen back a little.