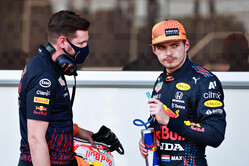 For the second successive race weekend, Charles Leclerc has taken pole almost unchallenged, after an incident brought qualifying to an early close.

In Monaco it was the Ferrari driver himself who crashed, causing the session to be red flagged, while in Baku it was his teammate and Yuki Tsunoda who caused the stoppage.

As drivers headed back to the pits, aware that the session would not be restarted, Christian Horner advised Max Verstappen that having gone quickest in the opening two sectors, pole was almost certainly going to be his. Instead, the Dutchman will start third, behind Leclerc and title rival, Lewis Hamilton.

"Ah, just a stupid qualifying to be honest," said Verstappen in the moments after the session. Anyway it is what it is.

"Still P3," he continued, "we have a good car, a good recovery from FP3 of course and everything was working out fine and all this shit is all the time happening. I don't care.

"In Q3... it's just unfortunate. It's a street circuit so these things can happen. Like I said, our car is strong so I just hope tomorrow in the race we can look after our tyres and score good points.

"There is still]a lot to play for," he insisted. "As you could see in qualifying, a lot of things are happening. So maybe in the race these things can happen again.

"We have a good car, let's just hope for a clean start and we'll see from there. With three different teams at the front it should be a pretty interesting race strategy-wise as well, and it is also about keeping your tyres alive. We are still up there so let's see what we can do tomorrow."

"I'm very, very pissed off today," added teammate Sergio Perez who will start from seventh, "given that we should definitely be in the top two, on the front row, at very least.

"But there are a lot of positives," he continued. "I think we should be able to have a strong race pace as well.

"I was on a great lap, into Turn 4," he said of his first flying lap, "I was about two-tenths up on my time, and I locked up. I think I was a little bit too close to Lando, and the wind picked up. I locked up, I lost the lap.

"I was pretty confident of getting a good lap time out of it. We've been strong all weekend. In Q3, really when it mattered, it was a disaster.

"With the out laps, the track is so big, but because we all want to be together, it's a disaster, starting that lap. Actually in terms of track position, Q3 was the worst that I had all weekend. We all went at the same time, and people created gaps, but then other people overtaking, not respecting the gentleman's agreement. It just made things a bit harder.

"We didn't put the lap when it really counted today. As simple as that."

"It was frustrating not to get that last run in Q3," admitted Christian Horner, "Max was improving and in with the chance of a tow at the end of the lap. But that's life and it was the same for everyone.

"Likewise for Sergio," he added, "he was banking on his second Q3 lap to show the pace he's had here all weekend

"We're still in good shape," he insisted. "Our car has been quick here this weekend and overtaking is possible at this track so it should make for an exciting Grand Prix and strategy will be key. It's still all to play for!"