Perez was close to retiring from Baku race 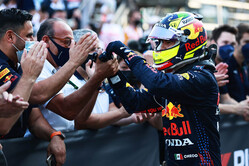 Race-winner, Sergio Perez has revealed that his team had been on the brink of retiring him in the final stages of the Azerbaijan Grand Prix.

On a day it all came together for the Mexican, Perez subsequently revealed that it was very nearly a case of a double DNF for Red Bull on the streets of Baku.

"We were close to retiring the car," he admitted, "but luckily we managed to finish the race. It was quite difficult all the way until the end."

Indeed, in the moments immediately after taking the chequered flag the Mexican was told to stop the car at the pit lane exit as opposed to completing the usual cool-down lap.

Indeed, team boss, Christian Horner subsequently admitted that due to a hydraulics issue there were fears Perez wouldn't make the restart.

"He was nursing an hydraulic issue," he explained. "We were really concerned that the car wouldn't get to the end of the race, which is why he stopped after the chequered flag.

"You thought that we could only lose when they got the restart, but thankfully it all worked out tremendously well, and Sergio did a great, great job.

"Sergio was fast all weekend," he added. "His pace was impressive from the start. Maybe he could have caught Max with the overcut if the pit stop had been quicker. In any case, it would have been very tight."

Despite a poor pit stop he emerged ahead of Lewis Hamilton and only just behind his Red Bull teammate, leaving him perfectly placed for when the tyre nightmare subsequently unfolded.

Though he had Hamilton hard on his heels, the usual dirty air issue meant the Briton was unable to make a move.

At the restart, the world champion got the jump on Perez, but then locked-up and headed down the escape road.

"First of all I have to say I'm very sorry for Max because he did a tremendous race and he really deserved that the win," said Perez at race end. "It would have been incredible to get that 1-2 for the team. But at the end you know it is a fantastic day for us."

Referring to the restart, he said: "I had a poor start and he was alongside me but I was like, I'm not going to miss it. I broke (sic) as late as I possibly can and he did the same. It didn't work for him.

"At least it's a good day for the team. This is definitely a strong boost of confidence for both myself and the team."

Indeed, this is exactly what Red Bull has been looking for in recent seasons, a driver who can support Verstappen in taking the fight to Mercedes and Hamilton, be it riding shotgun for the Dutchman or merely being part of the strategic game plan when the pit stops come around.