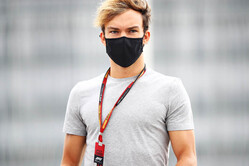 Pierre Gasly: "I feel my podium in Baku was well deserved as the whole weekend was excellent, everything was going well in free practice and I felt really comfortable in the car, the potential was there. We improved the car for Saturday, impressively quickest in FP3 and then in Qualifying it was the first time we were really fighting for the chance of pole position, ending up a couple of thousandths off the fastest time. We knew we could do something from fourth on the grid and it was a complicated race, especially as we had to turn down the power a bit in the second stint. It was down to good teamwork, making the right choices when it mattered, in Qualifying and in terms of strategy and also the pit stop went well. Yuki was on the pace as well from Saturday, on a track that's not easy, so it was a really solid weekend for the team. Earlier in the year we had some good Saturdays, although Sunday didn't always go as well, but the last two races we did an excellent job with no mistakes. It was just what we needed and to be rewarded with a third-place podium is super.

"It's come at just the right time, as we now have my home race at Paul Ricard. Everyone in France is getting very excited. There is a lot of enthusiasm and strong expectations for the rest of the season. The performance level we have demonstrated definitely makes us keen to see what we can produce in the coming races. We will tackle this weekend with the same approach as before.

"To be honest, I've not done anything special at Paul Ricard in the past. In my first F1 race here I collided with Ocon and had to retire on the opening lap and in 2019 it wasn't a fantastic weekend and I ended up tenth. Actually, Baku was another track that had never gone well for me until this year and so I'm hoping we can follow the trend and change that this weekend also.

"The circuit is quite special with plenty of run-off areas, unlike the last two tracks, so the risks are not as high, but it is still quite complicated and technical because there are some types of corner here that you find nowhere else, in particular the Beausset corner in the final sector, the very long right hander followed by the left. In terms of the car, clearly our first job will be to work out the best set-up for this unusual layout.

"I've heard the organisers are allowing 15,000 spectators per day to attend, which is great as I was really hoping that fans would be there for my home race. It's important to be able to share the weekend with them and it's significant as it will be the first time I will race in front of a home crowd as a Grand Prix winner, after my victory in Monza last year. It's going to make it very special so I'm feeling a bit impatient to experience that. And the podium in Baku has caught people's attention, so I have had plenty of media interest to deal with. I don't want to burn out before the weekend begins so we are trying to manage it as well as possible."

Yuki Tsunoda: "Before Baku I had a couple of difficult race weekends, so the result there was a good feeling. Compared to previous races, my preparation was much better than normal and right from FP1, I felt ready. The week before Baku I moved to Italy, spending most of the time in the factory, studying our approach to race week and looking at previous issues with the car. We decided to take a little bit of a different approach to the race week and have more conversations and that worked well. In Qualifying I made Q3 for the first time and overall, I think we have established a new baseline for how to approach a race. The overall result was okay, I'm quite happy, even if it was a shame I lost a place after the restart.

"Since Azerbaijan I have been back in Italy. The weather and the food are good, and I can spend more time in the factory talking to the engineers. To move to Italy was the right decision and something really positive for me, although it does mean I have to travel back to the UK for simulator sessions.

"As for the next round, I have raced in Paul Ricard twice before in Formula 3, which means it is a different situation after Portugal, Monaco and Baku which were all completely new to me, and that will be a positive factor. Ricard will be different in a Formula 1 car and Sector 3 will be key to the lap, with tyre degradation maybe being an important factor. It's quite a flat track and, unlike the last two races, there are no walls! There are very big run-off areas, so I don't have to be as cautious in my approach as I find the limit. Set-up wise it will also be very different to Azerbaijan where our car worked really well, as there are no low speed right-angle corners. It is a completely different track in every way. I am looking forward to it and hope I can finish in the points again."