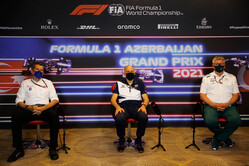 Franz, can we start with you please. Yuki told us yesterday about his move to Italy that's taken place since the Monaco Grand Prix. It sounds like you're a hard taskmaster but why is it important for him to make the move to be closer to the team?
Franz Tost: You know it's a gift to go from England to Italy. Beautiful weather, fantastic kitchen, nice people and, apart from this, he has the possibility to work close together with the team, with the engineers because he still has to learn a lot and, he always wanted to come to Italy, but during the winter months it was decided he should stay in England and now he is in Italy, he's living there and he enjoys it and we are happy to have him close to us because then we have everything better under control.

And who devised this programme for him? Was it you?
FT: Yes.

Now Franz, it's another new circuit for him here and these two street circuits in a row: Monaco and now Baku. It means it's a tricky part of the season for him. Can you just sum-up how it's been going these past couple of races?
FT: We must not forget the last races were really not so easy for him. He had never been in Portimão, he has not been in Monaco and this is the first time here in Baku. The level in Formula 1 is really very high and you have to get everything together to be in the front part of the midfield. I must say, also in Monaco, the first practice session, he did a really good job. He was not far away from Pierre. Unfortunately in the second free practice he pushed a little bit too hard and ended in the wall - but it's part of the learning process. You cannot expect that the newcomer at these tracks does not make any mistakes. We can see even the experienced drivers struggle in some corners. And so far, his learning process is going onwards, and his learning curve also is a good upgrade. We have to support him now. This is also the reason we told him to come to Italy, to work more with the engineers, to analyse more the data, just to come up to speed - especially on brakes, which he doesn't know - as fast as possible. Also, this morning session was OK for him. He had once locking fronts, I think it was a technical reason, we have to sort this out. The rest was fine. I think in the second free practice, he will improve his performance and hopefully he will not have a crash, or something like this - because important for him is to do laps. Every lap will increase his experience, and then I am quite optimistic for the qualifying and the race because the car seems competitive and we simply have to work with a newcomer. It's not only Yuki, it's generally when you get a newcomer more than with an experienced driver, and this is what Scuderia AlphaTauri will do and therefore I'm still convinced Yuki will have a successful season.

Guenther, on the topic of mentoring drivers, Nikita spoke yesterday about some advice you gave him that helped his performance in Monaco. Could you just tell us a little bit about that discussion - and was the improvement for him race-specific or do you expect it to continue on?
Guenther Steiner: There is not one specific thing, he cannot sort these things out in one session. We talked since the beginning of the season and I just tried to give him confidence - though I'm getting worried now after all that Franz said about how good it is in Italy for rookies, that they now don't want to move to Italy. So, Franz, you have to welcome them as well if they want to go now if it is so beautiful but...

FT: You should know, you are from Italy!

GS: I know it - but I don't tell the drivers where to go. So, no, seriously, it's just he needs to grow his confidence, that he did a good job again today, until a few minutes to go in the session. I think the last minutes in the session are somehow the most difficult ones for us after Mick had it in FP3 in Monte Carlo and Nikita in FP1. As Franz assessed, it's very competitive. We are not looking for the front of the midfield, we are just trying to train the drivers as much as we can. What our two have got as well - and we knew this, this is not a surprise - they have no reference. Their reference is their team-mate, which is a rookie as well, so it's very difficult. It makes it much more challenging to learn things. I think they just need to get in the weekend and just have the confidence that they can improve and not just looking at times to say 'I'm good or I'm bad'. There is more than a time. There is 'how much did I learn?' 'how much progress did I make?' There's a lot to be learned. And the learning will continue. We knew this going into this season and in the moment it is working out as we saw it coming. I'm not unhappy. Obviously I would like to replace crashes but we will deal with that one anyway we have to. There is no other way to do it but in general they're making progress, it is getting better, everything calms down so, for me, those are the positive sides of it.

But were you surprised by the step forward that Nikita took in Monaco - and at Monaco of all places? Such a difficult track.
GS: I wasn't surprised because it will come. At some stage, there will be a step, and where it is, I cannot define, but I knew it was coming, that he will make progress. He was pretty good in F2. He won races in F2, so why would he not make that step? Like everything else in Formula 1, how much time have you got? Like in every top sport, you don't have endless time to do this. It was good that it came in Monaco and again this morning he did a good job as well. Hopefully we just can build on this, what happened in Monaco. But you know it's an up-and-down. There will be races where we are down again until we stabilise ourselves. To be honest, I knew it was coming. If it was Monaco... maybe just circumstances.

Otmar, onto you, can I continue the theme. Obviously Lance isn't a rookie but do you see Sebastian taking on the mentoring role within your team?
Otmar Szafnauer: Lance isn't a rookie, he's been with us for a while now and there's a good dynamic between Lance and Sebastian. Sebastian does have more experience and the way we go about debriefs now has changed a bit. Sebastian has expanded the way we do things, not just Lance but the entire team have embraced that.

And can we throw it back to that great result for you guys in Monaco. P5, P8, it was a good reward after a tough start to the season. Just how much satisfaction did it give you personally, and how much of a lift has it given everyone in the team?
OS: You know Monaco's a special place and it's a bit of a one-off. We will continue to build on what we had in Monaco. It lifted the team, it showed that, in a place like that, we did a good job. Pitstops worked well, our strategy was pretty good and we had decent qualifying - so, if we can continue to do that in other places, long may it continue that we have both cars in the points.

Do you think it will transfer here - because Monaco is a bit of an outlier isn't it?
OS: It's early days here. We had a good first session. We still haven't run the softest of the compounds. We'll do that in FP2. There's still a lot to learn and some homework to do tonight to get ready for tomorrow.

(Dieter Rencken - Racing Lines) Good afternoon gentlemen. When we look at the budget cap it was introduced in order to level the playing field yet we have all these controversies about flexible wings and whatever else. Surely the budget cap actually regulates these sorts of things through limits on cost control? Would you prefer to see regulation via cost-control rather than strict regulations?
OS: I think there needs to be a combination Dieter. I personally would lean towards having regulation by cost-control so the smarter teams, not the richer teams also have a good chance - but you need technical regulations and sporting regulations as well. So, it's got to be a combination.

FT: You need strict sporting regulations and a cost-cap regulation. You need both if you are in Formula 1 because otherwise there are always loopholes.

GS: Yeah, I would say the same. We need technical regulations which need to be followed and then the cost-cap comes in, I wouldn't say at the end, but with it, you know? It needs to be really clear what you can and cannot do, and if there are loopholes, like it seems to be on this rear wing, they need to be closed and we need to move on. But we need technical regulations and the cost-cap is then there anyway.