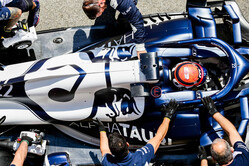 AlphaTauri's Yuki Tsunoda has confirmed that he has moved to Italy in a bid to improve his understanding of the car... amongst other things.

One would be forgiven for believing that, following his admittedly impressive debut in Bahrain, Yuki Tsunoda began falling for the media hype that inevitably followed.

Next time out, the previously shy and retiring Japanese rookie, was swearing at rivals who got in his way and even berating his own team.

This would have been fine of course were he still racing at the same level, but he wasn't. For other than failing to give his teammate a run for his money in qualifying or on race day, Tsunoda was making mistakes, costly mistakes, including crashes at Imola and Monaco.

Indeed, just a few races into his F1 career, the Japanese youngster was drawing the ire of the dreaded Helmut Marko.

Consequently, the youngster is moving from his current base in Milton Keynes to Italy, a move he had previously requested but was turned down.

"I got told while I was in Monaco - on the Saturday I think - I crashed in FP2, which was not a good thing, and I think Red Bull was not happy. We were talking to Red Bull, AlphaTauri, about having a little bit of a big change for me as I think the last three or four races, I haven't had a good race.

"So to change something, you need a big difference," he added. So, they decide to me to move to Italy, to have more chats with engineers, also to go to the factory and have more opportunity to talk about the car.

"For me that is a very good decision; actually I was asking Red Bull from the beginning of the season if it was possible to move to Italy. First of all, I stay in Milton Keynes, but now I can go to Italy and stay a bit more with the team so that's a big positive for me.

"Last week after the Monaco GP, I flew directly to Faenza," he revealed. "Most of the plan the whole day is scheduled by Franz. From 9 gym session to 11, which is an experience I never had. 11 to 12.30 was engineer meeting and lunch and having also English lesson because my English is not perfect. (It's a ) good opportunity to learn English. Three to 4.30 is again engineer meeting and 4.30 to six is again gym session.

"Most of the things scheduled by Franz I didn't enjoy last week," he admitted, "but it is what it is.

"Especially the engineer meeting gave a really good understanding of the car so that was really good preparation for this week. Mainly the gym session, the time is much longer than usual.

"Hopefully I won't be like a body-builder by the end of the year but we'll see," he laughed.