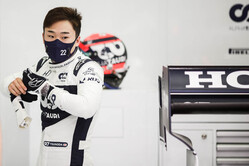 Yuki Tsunoda has apologised after suggesting that AlphaTauri is not giving him the same equipment as his teammate.

Failing to make it into Q2 today, the Japanese youngster is one of only three drivers to have been out-qualified by their teammate at every race.

However, speaking to the media shortly after, he actually questioned whether he and his teammate, Pierre Gasly, have the same equipment.

"I wasn't pushing too hard on the out lap, I just do like normal," he said. "The tyre temperature is spot on before the lap. I think the team, we set up, we set up the tyre, but I don't know. It's not the place I want to fight.

"The performance in this car, it's easy to go to Q2," he added. "I really struggled to even go to Q2. It's always different feedback compared to my team-mate, even when we try the opposite.

"I have a little bit question mark (if it) is the same car," he continued, "of course it's the same car, but just the character of the car is just too different.

"Maybe, of course, it's a different driving style. I don't know, I don't understand what happened, why I'm struggling this much."

"I wanted to apologise for my comments today," he wrote. "I didn't mean to criticise the team who have done a great job all weekend. I was just frustrated with my performance. Full send tomorrow."

After taking the world by storm in Bahrain, the youngster has failed to live up to the early promise, crashing during qualifying at Imola and subsequently spinning in the race, while last weekend saw the Japanese finish a distant 15th.

During this morning's practice session, Tsunoda was told by his engineer to "calm down" after the youngster queried advice he had been given as to how to improve his lap.