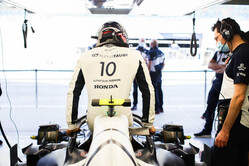 Pierre Gasly: "Looking back at the last round in Imola, there are some positives to take away from what was a disappointing weekend in terms of the result. We were in the top ten for all free practice sessions and were again in the top five in Qualifying - three and a half tenths off the pole time - which must be one of the best Qualifying times for the team. Seventh in the race is still a good result, even if we know we should have done better. We'll discuss it as a team and see how we can make sure it doesn't happen again.

Last year I had a good race in Portimao, finishing fifth. It's a really unique circuit with all the gradient changes, going up and down like a rollercoaster. It's fun driving there and very different to what we're used to - as a low grip track, the car slides a lot and it's not easy to get the tyres up to temperature. We will be running the C1 hard tyres and last year, especially in FP1 they were very hard to warm up, but this time we have a bit more knowledge and experience and the weather will certainly be warmer this year. So, we will face a different challenge to the ones from the first two races.

After two races, we are now used to only having an hour for each free practice session. It hasn't changed our work programme, but it does mean the track is busier with more cars out at the same time, so there is a bit more action and you spend less time waiting in the garage. I quite like it, as the sessions are more intense."

Yuki Tsunoda: "I learned a lot of lessons in Imola. It was quite the opposite to Bahrain which had gone well. I had very high expectations for Imola and so had the team. Everything had gone smoothly in free practice but then I made a huge mistake in Qualifying, which meant I had a very tough race. I had not had a bad crash for two years, so this was a lesson which I can learn from going into the next races. The race was also the first time I had driven a Formula 1 car in the wet and using the intermediate tyres was really tricky, so I had to build up my speed gradually. But we have a car that has been competitive at the first two tracks, capable of running in the top six.

The track in Portugal is new to me. I don't know what to expect, although I have done a couple of sessions driving Portimao on the simulator and I've watched last year's Grand Prix. It is a beautiful circuit with interesting corners like Turn 1 and the off-camber Turn 13 which looks quite unique, as well as so many up and down sections and blind corners. I think it could be tricky for track limits, but I will build up my pace gradually. It will be a completely different situation to the previous two rounds, as I had already driven a lot in Bahrain and Imola before the race weekend. During free practice I hope to complete a significant number of laps to adapt to the track as soon as possible and hopefully be well prepared for Qualifying."