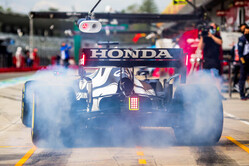 Yuki Tsunoda has apologised for his "silly mistake" in Q1, admitting that he got "too excited".

Expletive laden outbursts during practice and again in the opening stages of qualifying were a clear sign that Yuki Tsunoda was getting impatient, the Japanese youngster letting rip at Sergio Perez, amongst others, and complaining of the "f****** traffic paradise" that was Q1.

Having lost track time on Friday morning due to a power unit issue, the AlphaTauri driver was seventh quickest in the afternoon and eleventh in FP3, one of several drivers to consistently fall foul of the track limits clampdown.

Hopes of building on his Bahrain success however took a dive when the youngster lost the rear end of his car after clipping the kerb in the Variante Alta in Q1, spinning backwards into the barriers and causing extensive damage, probably necessitating a new gearbox.

"Just pushing too much at the entry, to be honest," he subsequently explained. "Until then the lap felt great, actually. I think that potentially it was easy to go through Q1 with one tyre set.

"I was too excited," he admitted. "For me, that was a silly mistake, so I feel really sorry for the team. But you have to reset today, and just drive the race tomorrow.

"It looked pretty bad actually, what I saw at the back," he said of the damage to the AT02. "I really hope the car is repaired properly tomorrow. Just feel sorry for the team today."

As for himself, it is only his pride that is damaged.

"I don't have any pain or anything like that," he said. "I feel more worried about the car than me."

Despite the obvious limitations to overtaking, the youngster, who will start from the back of the grid, is aiming to give a good performance.

"Tomorrow is going to be maybe different conditions, rain, to try to help me a bit," he said. "So just really put it altogether and don't do mistakes like today.

"I think it will be a bit of a different... It's going to be different conditions, so I just have to adapt to the conditions tomorrow, and push until the end."