Verstappen throws down the gauntlet 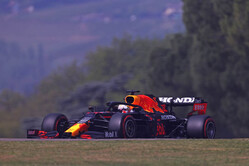 Ahead of today's sole free practice session the air temperature is 10.4 degrees C, while the track temperature is 19.3 degrees. It remains bright and sunny, but even chillier than yesterday.

While Valtteri Bottas topped the timesheets in both of yesterday's sessions, marginally edging out teammate, Lewis Hamilton in the seemingly much-improved Mercedes, Max Verstappen and Charles Leclerc insist that there are no lasting after effects of their respective driveshaft issues and encounters with the barriers.

Indeed, the Monegasque has expressed surprise at how close Ferrari is to the front runners - prompting fears that technical directives might yet follow.

With Verstappen sidelined for much of FP2, it fell on Perez to uphold Red Bull honour, though it was Pierre Gasly who recorded the best time of the Honda-powered teams.

McLaren has yet to show its hand, as has Alpine, while the fact that Aston Martin is already threatening legal action unless the rules are changed probably tells you all you need to know on that score.

Williams could throw in a surprise today, while Alfa Romeo is also looking much improved.

The lights go green and Raikkonen is first out of the box. Indeed, on mediums, the Alfa Romeo driver has the track to himself as nobody else seems particularly keen to get to work.

The Finn subsequently crosses the line at 18.249, but this is instantly deleted for exceeding the limits at T9. He subsequently posts a 17.331.

At this point the Haas duo head out, both on softs. Schumacher posts 18.660 and Mazepin 19.127, however, again, both times are deleted. The Russian asks his team to check the video, clearly not taking the stewards word for it.

At which point Giovinazzi heads out, like his teammate on the medium rubber, followed by Alonso who is also on the yellow-banded rubber.

Schumacher goes second (17.869), ahead of Alonso, Mazepin and Giovinazzi.

Seemingly Ferrari is to run a new floor which it had originally planned to run in Portugal, and to celebrate the fact Leclerc goes quickest (17.321) on mediums.

19 minutes in and the McLaren pair head out, along with Perez, all three sporting mediums.

Quickest in the second sector, Norris posts a 16.938 to go third, as the Aston Martins head out.

Norris has his time deleted as does Alonso, though the Spaniard erred at T15 as opposed to T9 which is catching everyone else out.

Bottas is on track on softs, a strange choice since the Mercedes didn't appear to favour them yesterday.

Perez and Raikkonen have their times deleted.

Hamilton heads out leaving Gasly and Verstappen as the only no-shows.

Once again, Norris has his time deleted, as does Leclerc.

Bottas goes quickest with a 16.402 as Latifi (lightly) spears into the barriers at the Villeneuve chicane, thus having the session red-flagged. The Canadian is able to get going again, but it's too late for Hamilton and a number of others who were on hot laps.

Meanwhile, Bottas had his time deleted, so Perez remains quickest, ahead of Leclerc, Sainz, Raikkonen and Giovinazzi.

The session resumes, with Tsunoda, Hamilton, Gasly and Verstappen yet to post times.

Russell goes tenth with a 17.533, ahead of Vettel and Stroll.

Hamilton goes seventh with a 17.129 as Verstappen begins his first flying lap.

Hamilton goes quickest in S1, and while he goes second overall (16.158), he appeared to exceed the track limits.

Verstappen takes a punishing ride over the kerbs at Acque Minerale as Hamilton does indeed have his time deleted.

Stroll improves to fourth and Russell eighth, as Mazepin has his time deleted.

PBs in the first two sectors are enough for Perez to close to within 0.430s of Bottas.

A scary moment for Gasly as he runs oh so close to the barriers at Tosa.

As the Mercedes pair head out on fresh rubber, Leclerc goes quickest with a 15.738.

Raikkonen takes a long, long trip through the gravel after geting it wrong at Rivazza.

Verstappen heads out on a fresh set of softs. Elsewhere, Gasly complains that his steering is "still a little bit bent".

Verstappen posts a 14.958, the Dutchman quickest in the final two sectors. Teammate Perez can only manage eighth (16.094), the Mexican having a poor opening sector.

Vettel improves to 12th with a 16.389, with teammate Stroll responding with a 16.424 moments later. However, the Canadian has his time deleted.

Giovinazzi spins under acceleration at Tamburello, the Italian subsequently querying why his tyres are so cold.