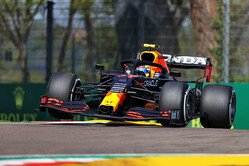 With three of the last four races having taken place in Bahrain, in addition to pre-season testing, this weekend we finally get to see the cars on a different - dare we say 'proper' - track.

While the next hour will be all about trialling updates - where they're available - and basic set-up, over the weekend we should get a better idea of who's hot and who's not, as well as much anticipated insight into where Mercedes and Red Bull really stand.

The lights go green, and Giovinazzi, Raikkonen, Tsunoda and Ocon are first out.

There's an early yellow when Perez spins at T4, while the Alfa Romeo pair waste no time in getting to work, posting the first times of the weekend.

There's an early spin for Mazepin also, who is off and into the gravel at Rivazza. He rejoins the track and dumps a shed load of gravel in the process.

As more drivers post times, Raikkonen is quickest (20.175), ahead of Bottas, Perez, Sainz and Hamilton. Yes, you read that correctly, Raikkonen heads the favourites.

Order is restored when Hamilton goes top with an 18.257, Raikkonen plummeting down the timesheets as his rivals improve.

Tsunoda is off and in the gravel at Tamburello, the cold conditions not conducive to good grip levels.

A 17.682 sees Sainz go quickest, as, just 17 minutes into the session all but Tsunoda, Alonso, Leclerc and Schumacher have posted times.

Gasly goes fourth before improving to second with a 17.743, the Frenchman keen to make up for the disaster that was Bahrain.

Meanwhile, in a curious move, Race Control announces that track limits are being monitored - which is what we expected - but that times will be deleted AFTER the session.

Gasly goes top with a 17.740, however on a morning on which everything that could go wrong for the broadcast team and live timing, there is no data on the tyres.

At half-time, it's: Gasly, Sainz, Hamilton, Verstappen, Stroll, Ocon, Bottas, Latifi, Norris and Perez. Leclerc has yet to post a time.

At which point Raikkonen improves to fifth with an 18.453.

Bottas' car is up on its stand in the Mercedes garage, while Vettel appears to have a brake issue.

Back on track, Bottas wastes no time in going quickest, the Finn stopping the clock at 17.396.

Out come the yellows - indeed the session is red-flagged - following an incident involving Perez and Ocon at the Villeneuve chicane. Moments earlier, Hamilton had gone off at T15 (Variante Alta).

Due to the various issues with the broadcasting this morning, it is unclear what exactly happened.

What we know is that somehow Perez suffered damage to his steering while his left-rear tyre detonated.

As marshals clear the area and the two cars are loaded onto trucks, the clock continues counting down.

The session resumes with 12 minutes remaining, and still no clue as to what actually caused the red flag.

Alonso is first out to get proceedings underway.

The Perez/Ocon incident - whatever it was - will be investigated after the session.

Sainz improves to 17.197 as the drivers make the switch to softs.

Christian Horner reveals that Perez and Ocon collided, the Red Bull driver on a fast lap while the Frenchman was on a slow lap and there was "contact going into the corner". He knows little more about it and is relying on the basic information from his driver.

Of course, the pair have history.

Latifi heads off into the gravel at Rivazza as his Williams appears to have a mind of its own.

Replay shows Bottas flying through the air after clipping the kerbs - bringing back memories of Rubens Barrichello on the Friday of that fateful weekend in 1994.

Despite subsequently being on what should be a cool down lap, Verstappen goes wheel to wheel with Hamilton. Wonder if the Dutchman was needled by Hamilton's comments yesterday.

Oh dear. Another red flag, this time for Mazepin, who has lost the Haas as he approaches the pitlane entrance after running wide ono the kerb and thence the gravel.

As a result of the red flag race control cancels the planned practice starts.