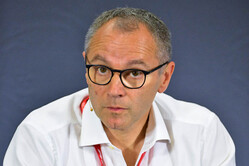 F1 boss, Stefano Domenicali has dismissed the idea that Grand Prix weekends be reduced from three to two days.

Among the numerous ideas put forward since Liberty Media took control of F1 is for race weekends to be reduced to two-day events.

Such a move, F1 bosses, including Ross Brawn, argue is that this would allow more races to be staged, a key part of the sport's strategy as it seeks to bring in more money.

However, team bosses, fans, drivers and promoters are against the idea, the teams arguing travelling around the world for a two-day event makes little sense, while fans and promoters want more on-track action for their money not less.

This year the Friday practice sessions are reduced to one hour, meaning that over the course of a three-day weekend fans only get to see their heroes in action for around six hours. A two-day format would seriously reduce track time.

Asked about the possibility of introducing a two-day format in a Q&A video on the sport's official website, Stefano Domenicali was adamant.

"All the organisers really wanted to have a full experience for the people and for the crowd, so we need to respect that," he said.

In the wake of last year's Eifel Grand Prix, which was reduced to a two-day meeting due to the weather conditions on the Friday, the Emilia Romagna weekend was run to a two-day format, Ross Brawn having wasted no time following the Nurburgring event in seizing the opportunity to suggest that the success of the weekend overall was good reason for the sport to seriously consider the idea permanently, much like he subsequently argued that the roller-coaster race that was the Italian Grand Prix was proof that reverse grids would work.

A previous critic of the idea, in the wake of the Imola weekend, Lewis Hamilton admitted that he was warming to the idea.

"That's 22 days less of 20 cars bombing around the track and polluting the air, the planet, so that's a positive," he said, without a hint of irony.

"It just made it so much harder for us," he added. "Normally you have two sessions on the Friday, you get time to make tons of different set-up changes, and if you're on the back foot, you've got time to catch up.

"When you start on a Saturday, you've got no time. You've got that one session to really get on top of it and the set-up between practice and qualifying. It made it so hard."

In the same Q&A, Domenicali predicted a second race in the US, a race in Africa, Ferrari being more competitive and a woman lining up on the grid.