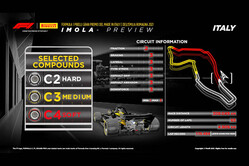 Once more, the three middle compounds in Pirelli's Formula 1 range - C2 as the P Zero White hard, C3 as P Zero Yellow medium, and C4 as P Zero Red soft - have been selected for round two at Imola in Italy: the same choice as for the Bahrain season-opener, which showcased a number of different strategies.

This was also the same choice as the last race to be held at Imola nearly six months ago, although the tyre structure has changed for this year to offer greater durability and allow the use of lower pressures for more resistance to overheating. Imola 2020 was also run with just one 90-minute practice session; this year there are three free practice sessions of one hour each.

The C2, C3 and C4 tyres have been chosen for their wide array of capabilities: well-matched to the varying characteristics of the Imola circuit and the ample range of possible weather conditions in spring, with the European season now getting underway much earlier than in recent years.

Imola is an old-school circuit that provides a big technical challenge with a mixed selection of different corners and speeds that test all aspects of a car's performance. With just one F1 race held there since 2006, back in the temperate conditions of late autumn last year, teams do not have a huge amount of relevant data to fall back on.

The track is quite narrow in places, which adds to the challenge of overtaking and puts an emphasis on strategy. Last year's strategy was influenced by a safety car late in the race (as well as an earlier virtual safety car) with Lewis Hamilton winning using all three compounds, having started on the medium. Without the safety car, a one-stop strategy would probably have been selected by the majority of drivers: also because the pit lane time loss is quite big at Imola, at roughly 25 seconds.

Although it was re-asphalted prior to last year's grand prix, Imola - an anti-clockwise circuit - is still quite bumpy and there are some big kerbs, placing notable demands on the cars and drivers.

There are no support races planned for the Imola weekend apart from Formula Regional by Alpine, which represents the first step on the ladder to international single-seater racing, just below Formula 3. This will affect track evolution for F1, with not a lot of rubber being laid on the surface. Formula Regional is supplied exclusively by Pirelli, with two sets of slick and wet tyres available in a single specification and two races per weekend. Imola is the debut round for this all-new series.

Mercedes will remain at Imola to test the 2022 18-inch prototype slick tyres on the Tuesday and Wednesday after the race: the fourth development test of the year after two slick sessions at Jerez and Bahrain plus one wet session at Jerez.

Mario Isola: "After an exciting start in Bahrain, we have exactly the same tyre nomination for Imola: a circuit with very different characteristics, which we are excited to be visiting as title sponsors, helping to demonstrate the prestige of 'Made in Italy' to the world.

"Although the last race at Imola took place nearly six months ago, conditions could possibly be different now in April compared to November, and of course the tyre construction has changed.

"As was the case for the last race here, we expect teams to go with a one-stop strategy, also because of the time lost in the pits and relative difficulty in overtaking. The safety car made a big difference last year, so there are a lot of question marks heading into this weekend's return to Europe."