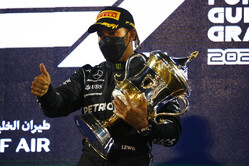 The Bahrain Grand Prix turned into a tense strategic tyre battle between Red Bull's Max Verstappen, who started from pole, and Mercedes driver Lewis Hamilton, who subsequently won the race after defending his advantage with more used tyres. Hamilton got in front after pitting earlier, but Verstappen was able to benefit from tyres that were 11 laps younger during the final stint. Both drivers ran different two-stop strategies.

Mercedes driver Valtteri Bottas finished third after making a late final stop for the P Zero Yellow medium tyre, to claim the extra championship point for the fastest race lap. Sergio Perez also stopped three times on his Red Bull debut, finishing fifth after having started from the pitlane. AlphaTauri's Pierre Gasly was the only other three-stopper, following a first pit stop due to a contact.

Temperatures were much cooler on race day than they had been previously during the weekend, with 21 degrees ambient and track temperatures of around 25 degrees, as well as gusting winds.

Mario Isola: "Tyre strategy was at the forefront of this exciting race, with Hamilton and Mercedes twice stopping earlier than Verstappen and Red Bull - meaning of course that Hamilton had to complete a longer final stint, which he managed brilliantly. All three compounds performed strongly throughout the race, with Verstappen also doing a long middle stint on the medium. We saw a number of different strategies, with five of the finishers using all the compounds during the race, and two three-stoppers in the top five as well. The strategies also reflected the tyre sets that each driver had available for the race."