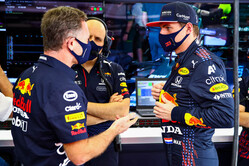 Christian Horner confirms that pole-man Max Verstappen incurred floor damage that probably cost him a tenth of a second.

Following his first run in Q1, the Dutchman asked his team to check his floor after running wide as he exited Turn 2.

While the team assured Verstappen that there was no damage, TV replays appeared to show pieces fall from rear of the Red Bull.

His time good enough to carry him through to Q2, Verstappen was seventh quickest in the second phase of the session, before going on to grab pole in Q3, out-pacing world champion, Lewis Hamilton by 0.388s.

Speaking at session end, a delighted Christian Horner admitted that Verstappen had in fact incurred damage to his floor, estimating that it cost the youngster around a tenth of a second a lap.

"He smacked the bottom of the car pretty hard, because they run so low, that we've lost a couple of bits of carbon under the front of the car there," he told Sky Sports. "Maybe he was carrying about a tenth's worth of damage through the rest of the sessions.

He definitely felt that," he added. "I mean, he's obviously sitting on it as he's hurtling over the curb, so he responded very well."

Indeed, Horner believes that the driver's subsequent performance, despite the damage, speaks volumes.

"If you think in the first run of Q1, when it's not that pressured, then you think 'oh no!'," added the Briton. "Not to big up that damage, but he's handled that incredibly well.

"The whole team's worked tremendously hard over the winter to get ourselves into this position," beamed Horner, "Honda have done a stellar job as well.

"Mercedes, look at what they've turned up with," he continued. "Everybody was writing them off over the last couple of weeks and they're right there, and they're going to be right there in the race again tomorrow.

"They're going to be a massive challenge for us to beat them but you know hopefully we're starting from the best possible place."