Vettel and Alonso admit to room for improvement 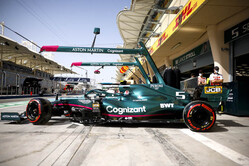 Though they both failed to make an impression on the opening day of the season, Sebastian Vettel and Fernando Alonso insist there is room for improvement.

In FP1, both drivers were closely matched with their respective teammates, Vettel 0.076s quicker than Lance Stroll, and Alonso 0.344s down on Esteban Ocon.

In the more representative second session however, the German was 0.376s down and the Spaniard 0.169.

Admittedly, it is very early days, but with neither Aston Martin or Alpine looking particularly impressive, and with the midfield expected to be even more competitive than last season, should fans be worried?

"It's very busy with less time in the practice sessions, but we were able to get a lot out of it," insisted Vettel. "We tried to get the most out of the time that we had.

"Every lap still helps you to get used to the car and get into a rhythm," he continued. "I'm trying a lot of things. There's a lot still to try, a lot to learn. It seems like fun.

"I'm looking forward to going over the data and coming back tomorrow with the insights we have gained," he concluded. "The car was really promising in some corners and less so in others, but that's normal at this stage of the season. We're obviously now looking into some of the stuff that we tried in the afternoon or the evening. Hopefully it will be a bit more clear and calmer tomorrow.

"As you can see, the midfield is very tight and everyone is learning quickly, but I hope we will be a factor."

"It felt good," said Alonso. "It felt amazing to be back and you feel different to testing. Racing is racing, and today I had that feeling, so I enjoyed the two sessions so much.

"I'm still working with the team on fine-tuning the set-up, different conditions to testing, he added, "but as I said I really enjoyed every lap."

While Vettel claims there is a lot left on the table, Alonso used a slightly different analogy.