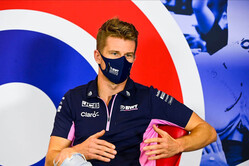 Though neither team has issued a formal announcement, Nico Hulkenberg says he has been recruited as reserve driver for both Mercedes and Aston Martin.

The German, who was dropped by Renault at the end of 2018, returned to the F1 grid last season when he replaced Sergio Perez and subsequently teammate Lance Stroll after they contracted the COVID virus.

Though he failed to start the British Grand Prix, he claimed points in his two other appearances for the team.

When it became clear that Alex Albon was to be dropped by Red Bull, along with Sergio Perez he was the popular choice among many fans for the seat alongside Max Verstappen.

"I'll be working as a reserve driver for Aston Martin and also for Mercedes in selected races," he told ServusTV today.

The news comes at a time Mercedes has appointed former reserve, Esteban Gutierrez as a "brand and business ambassador".

"Esteban is a valued member of Mercedes," said Toto Wolff, "and his work behind the scenes since 2018 has made an important contribution to delivering maximum performance from the car at every race weekend.

"Since I have known Esteban, I have been impressed by his overall understanding of our industry and seen the potential for him to make a broader contribution to our success," he added. "He has supported us to develop valuable commercial relationships in the Latin American market, and he is well-placed to contribute more deeply to other areas of the team as well. Esteban's new position will enable him to add value across the team and we are excited to work with him even more closely."

However, it's understood that the Mexican, who previously raced for Sauber and Haas, no longer has the superlicence points to be eligible to participate in a Grand Prix should his services be required.

Mercedes has Stoffel Vandoorne and Nyck de Vries on its books but with both participating in Formula E there are a number of race weekends that clash with F1, most notably Spain and Monaco.