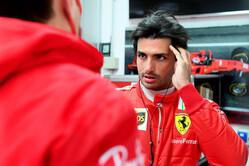 As he prepares to make his debut for Ferrari, Carlos Sainz speaks of his "special affection" for his predecessor, Sebastian Vettel.

Ironically, the incident which led to this special bond between the pair dates back to 2014 as Vettel prepared to leave Red Bull for Ferrari.

Alongside his Formula Renault 3.5 Championship activities, Sainz, a member of the Red Bull Junior Team, was employed by the Austrian team for simulator running, particularly over Grand Prix weekends.

At season end, both drivers having won their respective championships, as he prepared to leave Milton Keynes for Maranello, Vettel paid tribute to the Spaniard for his vital role in securing his fourth title, as Sainz explains...

"I have a lot of respect for Sebastian," Sainz tells Spain's Soy Motor. "I think he is one of the drivers who is going to mark an era in Formula 1, regardless of maybe the most difficult years he has had.

"He knew that at four o'clock in the morning I spent hours on the set-up, recommending settings for his race in Australia and he was kind enough to send me a letter thanking me for that effort in the simulator and those hours of work I had put in.

"Since then I have a special affection for him," he admits, "and I have a relationship with him beyond the cameras, which maybe I have never told him and someday I will tell him, but since then I have a great respect for him."

The following season Sainz partnered Max Verstappen at Toro Rosso, an all-rookie line-up with an average age of just under 19.