Verstappen not getting carried away despite "best" test 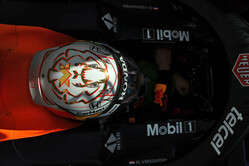 Despite strong pace and reliability, though he admits to Bahrain being "the best" pre-season test, Max Verstappen refuses to get carried away.

They might have been less than forthcoming in terms of pre-test images of the car, grudgingly issuing two renders that gave almost nothing away, but once the lights went green for pre-season testing it was clear that it wasn't only those renders of the RB16B that had been kept in the dark by Red Bull.

On Sunday, Max Verstappen signed off in the same way he began the three days of testing, posting the best time of the day, and on the harder C4 softs to boot.

Though the Austrian team didn't enjoy the most mileage, completing 369 laps to Alpha Tauri's 422, it completed almost a full race distance more than great rivals Mercedes.

So, the RB16B has pace and reliability, and both drivers look supremely confident, however Verstappen prefers to keep his feet firmly on the ground.

Asked if it had been a good test, the Dutch youngster was in no doubt: "Yeah, definitely I think it has been the best," he grinned.

"But it doesn't give you any guarantees," he quickly added. "We'll find out through the first race weekend where we are."

Like its great rival, right up until the last minute Red Bull had been keen not to reveal how it had dealt with the new aero regulations, particularly in terms of the floor, however it soon became clear that the Milton Keynes outfit had done a better job, showing greater stability than the W12, which, according to Valtteri Bottas is "snappy" and "unforgiving".

"You know you will lose a bit of downforce on the car with this floor, but so far, it's been quite a stable," said Verstappen.

"We always look in to what we can improve," he added. "For sure there are some things we want to work on, but I guess every team has that.

"We'll find out for sure in a couple of weeks in Q3 where we really are," he admitted, "but in general I would say the car feels good and I'm looking forward to going racing."