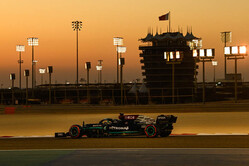 Even before Sunday afternoon's emphatic performance from Max Verstappen and Red Bull, world champion Lewis Hamilton was admitting that the Austrian team look to be "a different animal" this year.

The seven-time world champion made the comment during the lunch break at the official press conference on the final day, before an afternoon which saw him lose a further hour of track time whilst Verstappen topped the timesheets.

Though Mercedes insists the lost hour was merely about carrying out its usual systems checks, having already lost time over the preceding days it was another indicator that all is not entirely well with the W12.

Hamilton's best time, set on the softest C5 tyre, was over a second off Verstappen's best - set on the C4s - and even off the pace of (C5 shod) Japanese rookie, Yuki Tsunoda.

"We've made a bit of progress with the balance on higher fuel and the car was more predictable but we can see from the data we've collected over the last few days that on race pace, we're not as quick as Red Bull," admitted Andrew Shovlin at the end of the session.

"The lower fuel work was a more confusing picture," he admitted, "we didn't gain enough and we need to go and look at our approach as far too many cars were ahead of us on pace today. We've had issues in recent years with pace in winter testing and managed to make good progress before the first race but we may have our work cut out this time."

Speaking at the official press conference during the lunch break, ahead of an afternoon that saw Verstappen, Tsunoda, Carlos Sainz and even the Alfa Romeo of Kimi Raikkonen go quicker, Hamilton admitted that Red Bull will be a major threat this season.

"They're looking strong," he said. "They've had some really good running. Max is looking... both the drivers I think, have been looking quite strong.

"They're going to be a different machine or animal this year," he continued, "with, I think, a real good strong line-up of the two drivers, and I think, a really good car.

"Having seen them win the last race, you can only assume they're going to be right there, if not at the front, of the first race. It's going to be a great long battle with them through the year."

While Alfa Romeo and AlphaTauri share the honours of the most mileage completed over the three days, Mercedes sits at the bottom of the pile.

However, as headline writers paint a picture of doom and gloom for the world champions, Hamilton, who is no fan of testing, insists he is not worried, even though he admits that Alpine and McLaren could also be a threat in the months ahead.

"I don't waste time worrying," he said. "That deters you from finding the solution, so we are just working hard and focusing on getting through the short amount of testing we have and trying to be as efficient as we possibly can with it.

"I think everyone's just keeping their heads down. No one is phased by it. We are a multi-championship winning team, and we know how to pull together and keep our head down, and focus on the job.

"But, without doubt, it is quite impressive to see the speed of some of the other teams. I think Red Bull are looking particularly strong. And it's great to see McLaren also looking strong, also Renault. So I'm excited, also, because that means more fun."