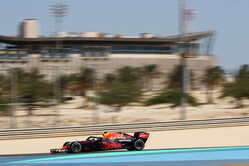 Sergio Perez signs off in style in Bahrain, setting the quickest time on a morning that saw the ten drivers on duty complete almost 4,000 kms (2,500 miles) of running.

Conditions were almost ideal for the final morning, though the wind picked up from time to time to cause problems.

Of the ten drivers on duty, only two - Kimi Raikkonen and George Russell - are in their cars for the duration, so while these two focussed on long runs and reliability, their rivals ran a number of different programmes before they signed off for the final time before free practice in just under two weeks.

Raikkonen completed a staggering 91 laps, though Valtteri Bottas wasn't far behind, the Finn completing 86 laps in a Mercedes which looks a lot better than on previous days.

Charles Leclerc and Lance Stroll both completed 80 laps while Mick Schumacher completed 78, indeed the driver with the least laps on the board was pace-setter Perez.

While most drivers went for a flyer on the softer rubber, for the most part long runs were the order of the day, Raikkonen and Leclerc both carrying out race simulations.

Interestingly, less than thirty minutes into the session, with the track yet to be rubbered in, Leclerc posted a time that was to end the morning second best, just 0.299s off the best that Perez posted later in the morning on softer rubber.

The SF21 looked to be a lot more stable this morning than on previous days, but one feels that the team has not made the step forward that was expected or indeed, required.

Over the course of the morning we saw good performances all round with only a few mistakes. That said, while there are no rules on track limits in testing, the stewards look to have their work cut out in two weeks' as most of the drivers were seen to be taking liberties at one stage or another.

At a time Mercedes is showing clear signs of improvement, the Red Bull pair are playing down their chances, while McLaren continues to impress.

AlphaTauri and Alpine are also looking good, while Aston Martin remains something of an enigma.

What was noticeable, is that in the closing stages of the session, rather than going for outright pace, Perez was sent out on fresh softs twice, merely for the purpose of pit stop practice - then again, as we have seen in the past, come Sunday this is where races can be won and lost.

With the usual uncertainty over fuel loads and tyres there are also doubts as to sandbagging with a number of teams, particularly AlphaTauri, appearing to hold back.

This afternoon, when conditions should be at an optimum, we will have Hamilton, Verstappen, Ricciardo, Alonso, Sainz and Vettel on track, and while it is unlikely that all our questions will be answered it should provide a fair amount of excitement on a day the sport is in mourning for the late Murray Walker.