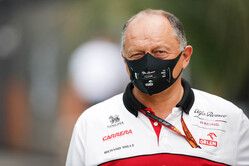 "In the course of his regular schedule of COVID tests, Vasseur had a positive result and, according to the protocols set out by the French authorities, he immediately self-isolated in his home," said the team in a brief statement.

A second PCR test, performed two days later, returned a negative result, the team confirmed, adding that Vasseur does not display symptoms and is in good spirits.

"However, in the interests of safety of Mr Vasseur himself, the team, all fellow competitors and the whole community and in respect of French regulations, Mr Vasseur will not travel to Bahrain and will continue operating from home for the next seven days, as required by the local authorities," the team confirmed.

"Mr Vasseur will be fully operational and connected to the garage for the duration of the test, and no deputy team principal will be named, with no further impact predicted on our operations this week."