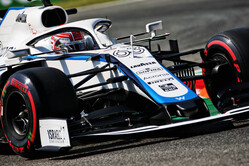 Still reeling from the disaster that was its 2020 season, over the winter break - such as it was – Ferrari has been talking up its chances this time around.

Other than improvements to the aero, the Maranello outfit is banking on a significant step forward in terms of its power unit, with Mattia Binotto, claiming at the recent team launch that the team has "recovered a lot of speed".

The news will be welcomed by both Alfa Romeo and Haas who had their 2020 chances compromised by the power unit's lack of grunt, and while an improvement is unlikely to cause the main midfield players to lose too much sleep, it could prove problematic for Williams as the Grove outfit seeks to re-establish itself.

"As we saw last year, the points separating the teams at the back of the grid were very small numbers," said the Briton.

"You only need one big weekend and that can catapult you from last to eighth in the constructors', which from a team side is huge and obviously from my side it's huge," he added, the youngster yet to score a point for the team.

"Haas and Alfa Romeo were our two rivals last year, and it's no secret that the Ferrari engine will be much stronger this year which puts us slightly on the back foot.

"But I think the guys have done a great job over the winter and I think as a minimum we want to be in the same position as we were last year, taking into consideration the improvements of the Ferrari engine."