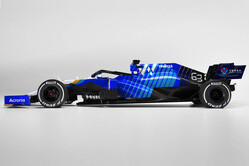 Williams has confirmed that the hacking which compromised its Augmented Reality car launch on Friday was completely outside of its in-house systems.

Earlier this week, the Grove outfit announced a first for F1 when it revealed that the launch of its 2021 contender, the FW43B, would use a dedicated app that would allow fans to project a full-sized 3D model of the car into their homes.

Unfortunately, hours before Friday's scheduled launch the team revealed that the plan had to be abandoned after hackers had compromised the app.

"We were very much looking forward to sharing this experience with our fans," said the team in a brief statement, "particularly during this difficult time when being able to bring in-person experiences directly to our fans is sadly not possible."

"Massive shame," tweeted George Russell. "I've seen the app and it was going to be an awesome experience for you guys. Whoever did this, seriously not cool."

"Such a shame," added teammate, Nicholas Latifi. "Car looks mega though and can't wait to share it with you guys."

With cybersecurity giant Acronis one of team's partners and its logos adorning the cars, some were quick to point out the irony, however the Grove outfit is keen to make clear that the hacking was outside of its in-house systems.

"Further to yesterday's statement, Williams Racing would like to clarify that the compromise of the AR app, which prevented us using it to launch the FW43B livery, was completely outside of Williams Racing's in-house systems and networks," said a spokesperson, "which are protected by leading cyber security companies with whom we are proud to partner."

Check out our FW43B gallery, here.