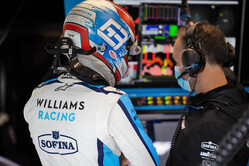 Williams has had to abandon its plan to launch its 2021 car using augmented reality after the app was hacked.

The Grove outfit planned to reveal the FW43B via an augmented reality app, but because the app was hacked prior to launch, this will no longer be possible.

"We have subsequently removed the app from both the Apple App Store and Android Google Play store," said the team.

"We were very much looking forward to sharing this experience with our fans, particularly during this difficult time when being able to bring in-person experiences directly to our fans is sadly not possible. We can only apologise that this has not been possible."

Ironically, one of the British team's main sponsors is cybersecurity giant Acronis.

“We are proud to support one of the most iconic Formula One teams on the grid," said Acronis CEO, Serguei Beloussov last week. "With our technology, we're ensuring the safety, accessibility, privacy, authenticity, and security (SAPAS) of Williams Racing's workloads, data, applications, and systems.

"By using this design methodology, we can deliver the highest calibre of cyber protection, keeping the team’s data tamper-free and easily accessible for smooth day-to-day operations. We are committed to working with Williams Racing as they protect their edge with Acronis."

However, the Grove outfit was quick to make clear that the hacking was outside of its in-house systems.

"Williams Racing would like to clarify that the compromise of the AR app, which prevented us using it to launch the FW43B livery, was completely outside of Williams Racing's in-house systems and networks," said a team spokesperson, "which are protected by leading cyber security companies with whom we are proud to partner."