As it returns to the F1 grid after sixty years, Aston Martin has revealed its 2021 contender, the AMR21.

One of the most anticipated Formula One car launches in recent years took place in The Vault, an immersive virtual experience that played host to the historic moment when Aston Martin unveiled its first Grand Prix car since the DBR5 which was raced by Roy Salvadori and Maurice Trintignant in the 1960 British Grand Prix.

The AMR21 was revealed in a striking green livery in recognition of the brand's traditional racing colours, carrying prominent branding from title partner, Cognizant, the IT giant helping lead the team's digital transformation journey towards future success.

Lawrence Stroll, opened today's event and welcomed fans, media, colleagues and partners who were enjoying the show virtually from all around the world. He was joined by Tobias Moers, CEO of Aston Martin Lagonda; Otmar Szafnauer, CEO and Team Principal and, by video link, Brian Humphries, CEO of Cognizant, who all spoke of the great significance of seeing the Aston Martin name back on the Formula One grid.

The new driver pairing of Sebastian Vettel and Lance Stroll were also prominent in the presentation, as well as technical director, Andrew Green.

Now that the car has been revealed, the team is turning its attention to preparing for a day of promotional running, which takes place at Silverstone, tomorrow.

This will mark the much-anticipated track debut of the AMR21, before it makes its journey to Bahrain for testing next week ahead of the Bahrain Grand Prix on March 28th.

"I have dreamed about this day for a very long time," said Lawrence Stroll. "I have always been a car guy, since I was a child. I have always loved racing, too. My first dream was to own a Formula One team. My second dream was to acquire a significant shareholding in Aston Martin Lagonda. Today is about the merging of those two dreams. So, as I say, today is all about dreams, and it shows that dreams really can come true, in the shape of our new AMR21.

"Aston Martin returning to Formula One after an absence of 61 years will have a powerful effect on the sport, the media and the fans, commanding global attention.

"This is just the beginning. The team is pushing forward, and our ambitions are limitless. We now have the pieces in place, the people and the partners, to make real progress. 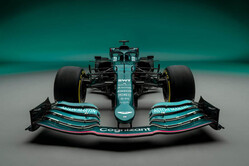 "The launch of the new AMR21 is also the celebration of a new beginning for Aston Martin. Today's transformational event has given us the opportunity to communicate the evolution of the iconic Aston Martin Wings logo for only the 12th time in the company's 108-year history. The Aston Martin Cognizant Formula One car is our group's highest expression of performance, innovation, engineering quality, attention to detail, and teamwork. For that reason it is natural that our new logo should make its debut on our new Formula One car.

"As for the year ahead, the core nucleus of what we need to succeed is already present and correct. I have great confidence in Otmar, Andrew and all who work for them. I firmly believe we have the perfect blend of experience and youth in Sebastian and Lance. An ethos of fierce ambition and unshakeable dedication is shared by every single team member. It is exhilarating to see - and to feel."

"Launching the Aston Martin Cognizant Formula One Team gives everybody associated with this company a real sense of purpose and pride," added Otmar Szafnauer. "It is a truly iconic car brand and it is a huge privilege to bring Aston Martin back to the pinnacle of motorsport - where it belongs.

"There is a change on the driving front, Sebastian joining us to race alongside Lance. Sebastian is someone we can all learn from, and his integration into the team has been very smooth - as you would expect from someone with so much experience. It is clear in my mind that Sebastian has lost none of his speed. It is down to us to create an environment in which he feels comfortable so he can deliver at his brilliant best. Lance is a very talented young driver, as his two podiums and wet-weather pole position last year demonstrated. We expect more of the same this year.

"Our goal for 2021 is to build on what we achieved last year and take a further step forward. There is no reason why we cannot achieve that with our talented workforce combined with the new financial investment. Success does not come overnight, but I am convinced that we are putting the key elements in place to continue moving up the grid this year and in the years ahead."

"It is a great privilege to have the Aston Martin name above the door," said technical boss, Andrew Green. "It is a real 'dream come true' moment and it shows how far this team has come. It is definitely the most exciting chapter in the team's history, without a doubt.

"I am confident that the 500 fantastic men and women who design, manufacture, build, prepare and maintain our car will have done everything in their power to create a good one. We all know how competitive Formula One is right now, and we certainly do not underestimate our opposition. We expect to be in the mix in the 'best of the rest' category from the start. We are ambitious yet realistic. But we intend to improve steadily, and our ultimate ambitions are limitless.

"In Formula One you never stop learning, and over the years we have learnt a lot. The AMR21 is an expression of that never-ending learning curve. It is closely related to our 2020 car, but it as an all-new chassis. Regulation changes intended to reduce every team's aerodynamic performance have also played a part, of course." 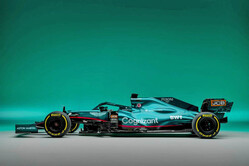 "Even though I have raced for four Formula One teams and for many years, starting a new season with a new team still gives me a sense of excitement," said Vettel. "As a driver, I have always kept my eye on the competition and this team has consistently impressed me with what they have been able to do without the biggest of budgets. So, when Lawrence and Otmar approached me last year, and explained what their ambitions were, I was immediately very motivated to join the team.

"I love the history of motor racing and Aston Martin is one of the great names of the past, so it is fun to be part of their return to Formula One after an absence of 61 years.

"Having visited the factory and met the senior people as well as my engineers and mechanics, I can see they are a really good group. I feel confident that, by the support Lawrence brings together with the Aston Martin name, we will make real progress together.

"I have not driven the car yet - obviously - but I think it looks great. I am really looking forward to getting it out on the track. I am also looking forward to working with and getting to know better everyone in the team, including my team-mate Lance [Stroll]. We will certainly make a big effort to deliver some good results together and have fun doing it."

"This is such an exciting time of the year," added Lance Stroll. "The car launch is when everything starts to feel real again, especially this year with our new identity as Aston Martin Cognizant Formula One Team. The new name is exciting for everyone and there is a massive buzz around the factory.

"I have come back refreshed from the winter break. It is going to be my third season here working with this great bunch of people, and that stability is what you need as a driver. I am at home here and I have built those strong relationships with the team now. All that stuff makes a difference when we are competing for those last fractions of a second. It is a case of knowing exactly what you need and how to work with the team to really optimise performance.

"It is all quite full-on this year, with fewer testing days available, but we have made good use of our simulation tools at the factory to help us prepare. There will be higher expectations this year for several reasons - including the team name - and I see 2021 as a huge opportunity for us to score some great results. We had real momentum at the end of 2020 and I believe we can hit the ground running this year, too."