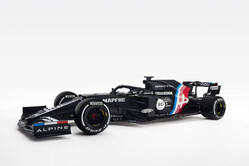 As McLaren kicks off the annual launch season, rivals Aston Martin and Alpine reveal the dates on which the wraps will be taken off their 2021 contenders.

While the Woking outfit had a new driver and power unit to show off, Aston Martin and Alpine not only have new drivers also but a whole new brand to show off.

Alpine, which was formerly Renault, and which has two-time world champion Fernando Alonso back on board, will launch its new car on Tuesday 2 March, the same day as Mercedes reveals its latest.

24 hours later and we finally get to see Sebastian Vettel in British Racing Green as Aston Martin returns to the grid after 60 years.

While Alpine, which suffered a scare last week when Alonso was involved in a road accident and fracture his jaw, has yet to confirm the exact time the A521 will be revealed, Aston Martin's launch will get underway at 15:00.

As was often the practice with Renault, earlier this year Alpine revealed a temporary livery for 2021 (pictured), though everything suggests the cars lining up on the grid in Bahrain will be a more traditional blue.

The next scheduled launch is AlphaTauri which takes place on Friday (19), followed by Alfa Romeo on Monday 22 February.

Ferrari has two launches, scheduled for 26 February and 10 March, followed by Mercedes, Alpine, Aston Martin and Williams, which takes place on Friday 5 March, a week before testing gets underway in Bahrain.