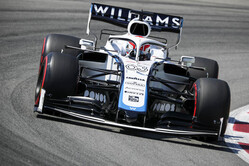 Williams has announced that its 2021 contender will be revealed on Friday 5 March, three days after Mercedes takes the wraps off the W12.

With a nod to the fact that 60 - 70% of the 2020 car will be carried over from last season, the Grove outfit has revealed that the 'new' car will be designated the FW43B.

Having finished last in the team standings for the past three seasons, it would be nice to think that the Grove outfit, which was bought by investment company Dorilton Capital last year, is going to take a step forward this year, but in all honesty this is looking highly unlikely.

Losing its title sponsor (Rokit) before the season had even begun was perhaps a portent of what was to come, the team (understandably) revealing the loss as part of its annual financial report along with the news that the Williams family was considering selling up.

George Russell and Nicholas Latifi are both retained, while Roy Nissany continues as (ahem) test driver.

Though the Grove outfit finished tenth last season, failing to score a single point, this was still a marked improvement over 2019, when, having missed much of pre-season testing, the team appeared to be playing catch-up all season.

Despite the shortcomings of the FW43, Russell rose to the occasion and consistently got through to Q2, and at times even threatened to score that elusive point.

Ironically, it was whilst standing-in for Lewis Hamilton at Mercedes for the Sakhir Grand Prix that he finally got on to the scoreboard.

At a time Zak Brown is claiming that the budget cap will benefit the smaller teams, it remains to be seen if Williams new owners will invest in those areas of the team where money clearly needs to be spent.

McLaren has managed to turn itself around following the horrors of its recent re-partnering with Honda, perhaps its equally historically successful fellow British rival can do likewise.