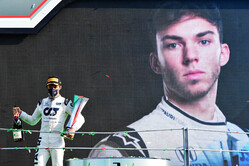 AlphaTauri becomes the fourth F1 team to announce its launch date as the wraps are set to come off the AT02 on 19 February.

As it stands, McLaren is looking to be the first to launch, Daniel Ricciardo and Lando Norris revealing the MCL35M on Monday 15 February.

AlphaTauri reveals the AT02 a few days later on the Friday, while on Monday 22nd, Alfa Romeo reveals its 2021 contender at an event in Warsaw.

Tuesday 2 March sees the much anticipated reveal of the 2021 Mercedes - hopefully with the full driver line-up.

Despite a significant step forward last year, AlphaTauri finished seventh in standings, one place down on where its predecessor, Toro Rosso, finished in 2019.

Constantly having at least one of its cars finish in the points, there were a number of stand-out performances, not least Daniil Kvyat's drive to fourth at Imola.

However, the team's highlight has to be its victory at Monza, Pierre Gasly giving the Faenza outfit its second ever win at the same circuit Sebastian Vettel claimed its first twelve years earlier.

While Gasly is retained, he is joined by Japanese rising star, Yuki Tsunoda, and while there is no questioning the youngster's talent it is thought his signing was partly to appease Honda.

Having finished just 28 points down on Ferrari last year, the Faenza outfit will be looking to improve this time around, though the one dark cloud hanging over the team, and its sister outfit, Red Bull, is whether the all-clear will be given to buy Honda's IPO after the Japanese manufacturer announced its decision to quit the sport.