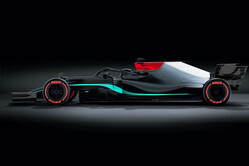 Be it the pandemic, costs, lack of rule changes or whatever, it's fair to say that the launches haven't exactly inspired thus far.

In Red Bull's case, be it technical innovations or surprise sponsors, we've seen little of the RB16B, the Austrian team issuing a pair of renderings that give little away.

Due to launch its 2021 contender on Tuesday, Mercedes, which is eyeing its eighth successive brace of titles, has offered a little teaser of what fans might expect, certainly in terms of livery.

Last year, while normality was the rule, the German team took the wraps off the W11, the latest all-conquering beast to sport the familiar colours of the Silver Arrows.

However, almost four months later, with the season yet to get underway as the pandemic took hold, the Silver Arrows gave way to the Black Arrows as the Brackley-based outfit announced a renewed purpose in terms of its commitment to greater diversity and inclusion in the sport.

Much like its silver predecessors, the striking black W11, especially in the hands of Lewis Hamilton went on to dominate the season, winning 13 of the 17 races and claiming 15 poles.

A rendering of the 2021 livery suggests the black will be retained, certainly at the front of the car, gradually lightening back to the traditional silver over the engine cover.

Currently devoid of sponsor decals - including those of chemical giant INEOS, which has now bought into the team, the rendering does feature the turquoise 'stripe' that represents Petronas.

How accurately the rendering reflects the W12 that lines-up on the grid in Bahrain late next month remains to be seen.